In nature, there are cacti, afraid of the sun, loving the water and in which there are no thorns. Such a cactus is called a Schlumbergera, or Decembrist, or Zygocactus. This plant is part of the genus of epiphytic South American cacti that grow on tree branches in tropical forests. Zygocactus blooms when a tropical summer is observed in its homeland, namely, in November or December, and flowering ends in the last January days. In the middle latitudes, the Decembrist was introduced in 1816 by collector Allan Cunningham. 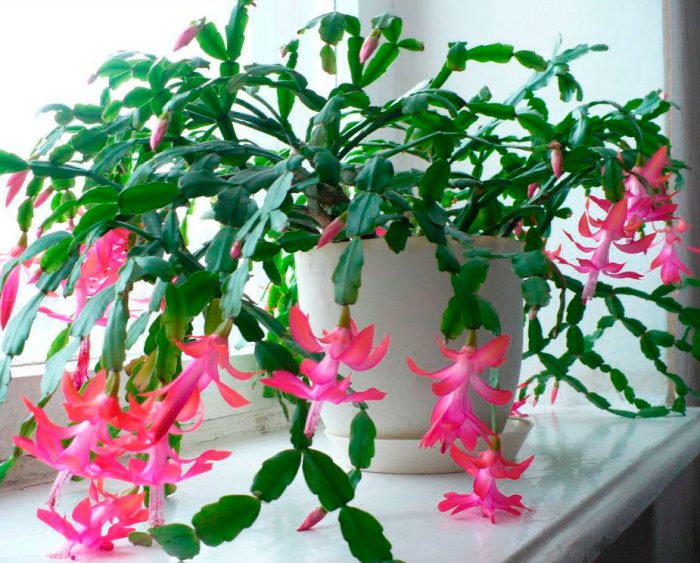 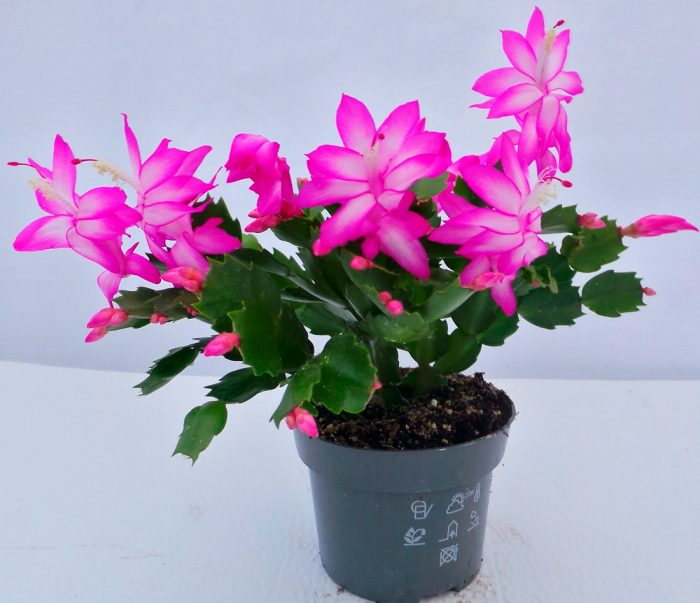 The Decembrist differs from many domestic flowers in that it blooms at a time when most of the plants have a dormant period. Such a plant also has other features that the grower must know about: 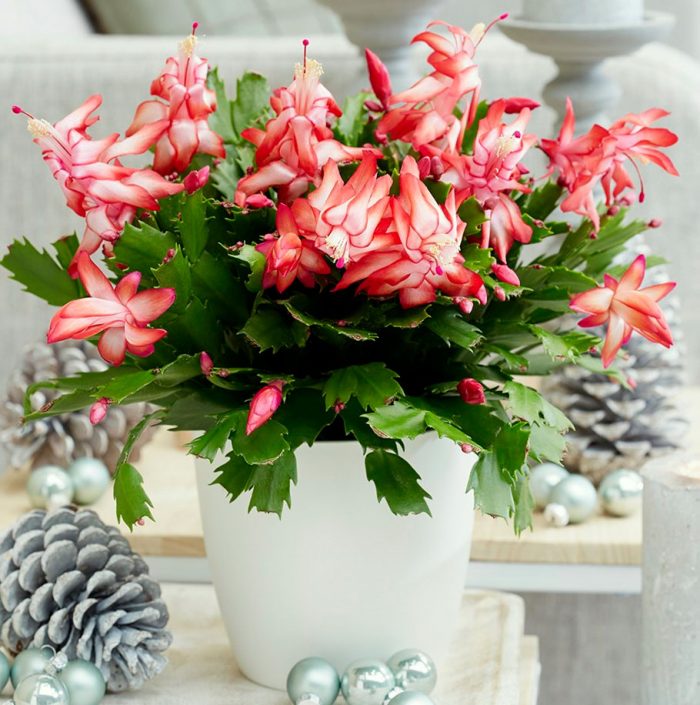 Features of growing Decembrist in room conditions are fundamentally different from those recommended for the cultivation of other cacti. Most care rules are similar to those used when cultivating ordinary hardwood house plants. For example, if you forget to moisten the substrate in a pot with a cactus in time, then nothing will happen because of this. But zygocactus should be watered systematically, and they use warm, well-settled water for this. It can also suffer due to too dry air in the room, so it is recommended to moisten the bush systematically from a spray bottle. And you can increase the air humidity by placing a pot with a plant on a pallet into which moistened pebbles are poured.

Ordinary cacti well tolerate the direct rays of the sun, but the Schlumbergera can suffer from them, so it requires mandatory shading. But it is not demanding on temperature, but best of all during the growing season it grows and develops in coolness (from 18 to 22 degrees). 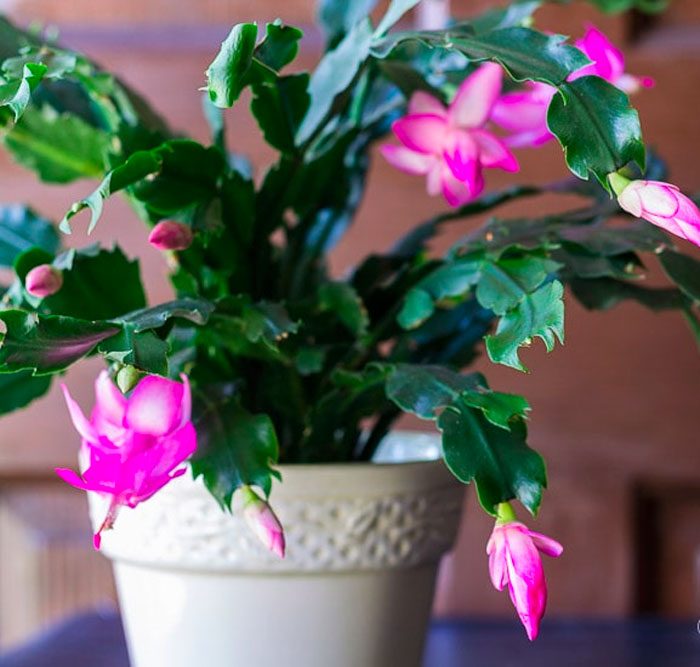 They begin to feed the flower in March, for this, with a frequency of 1 time per month, a complex mineral fertilizer for cacti is added to the soil mixture, while using a half dose of the one recommended by the manufacturer on the package. In the summer, after the shoots begin to grow and develop intensively, the frequency of top dressing is increased to two times in 30 days. With the onset of September, they stop fertilizing the substrate. Experienced flower growers recommend systematically treating the bush with a fungicide solution to protect it from fungal diseases.

Formative pruning of the flower is carried out in June. For this, the excess part is not cut off, but carefully unscrewed by hand. As a rule, pruning is too long shoots, as well as those that grow incorrectly. In addition to the fact that after pruning, the bush looks more impressive, it also positively affects its flowering, which becomes more magnificent. 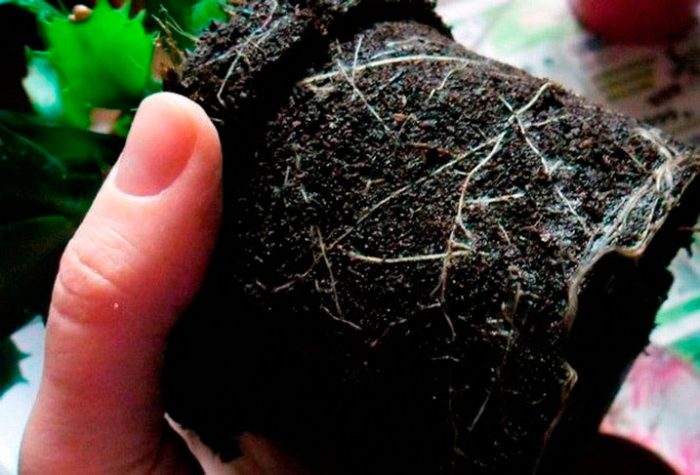 The Decembrist is transplanted in the last days of February after he finally fades. The transplantation of young bushes is carried out once a year, and adult specimens - 1 time in 4 or 5 years. Since zigocactus has a surface root system, a low but wide pot is used to plant it. A drainage layer is made at the bottom of the pot, the thickness of which should be equal to 1/3 of the height of the tank. For transplantation, a ready-made purchased cactus soil mix is used. In order to prepare the soil mixture with your own hands, you need to connect the sheet and turf soil, as well as sand (2: 1: 1). Then add a bit of expanded clay or crumb brick to the mixture for looseness, as well as very little coal powder for disinfection. The resulting substrate should be a slightly acid reaction. 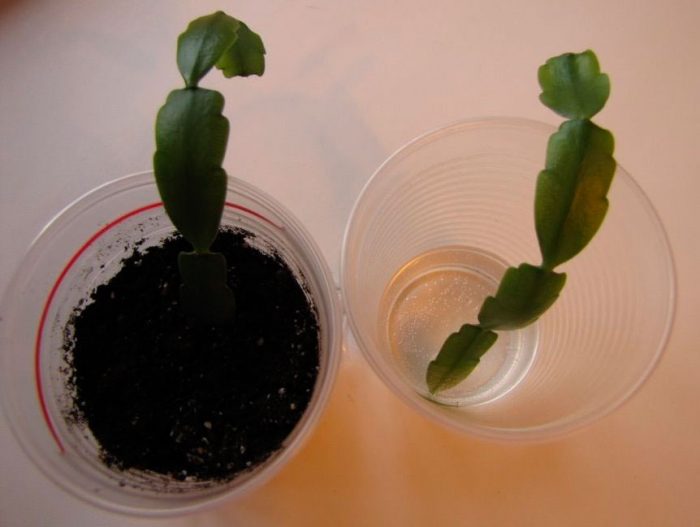 Most often, indoor zygocactus is propagated by cuttings. To begin with, two or three extreme “links” must be unscrewed from the stem, after which they are left in the fresh air for several days, where they should dry well. For rooting, the cuttings are planted in a moistened substrate, and on top of them they are covered with a cut-off plastic bottle or a transparent glass jar. Remove the cuttings in a shaded place and provide them with systematic ventilation and coolness (from 15 to 20 degrees).

Most often, propagation by cuttings is carried out after trimming the Schlumbergera, since after this procedure a large number of ready cuttings can remain.

Pests and diseases of the Decembrist 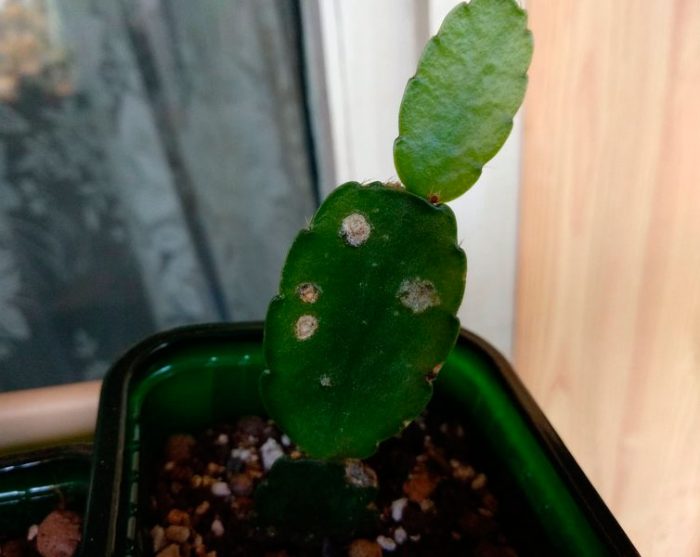 Zygocactus can suffer from fungal diseases, for example, from phytium, fusarium or phytophthora. The causative agents of these diseases can be in a poorly prepared substrate, from which they penetrate into the flower, and the root neck of the plant is damaged first. The affected bush becomes faded and has a grayish tint, and the dying of segments begins. As a result, the flower begins to fade even with systematic watering. In order to get rid of fusarium, the Decembrist is treated with a solution of a special fungicidal agent, and if they are infected with late blight and phytium, the bush is sprayed with Topaz, Maxim or Vitaros. 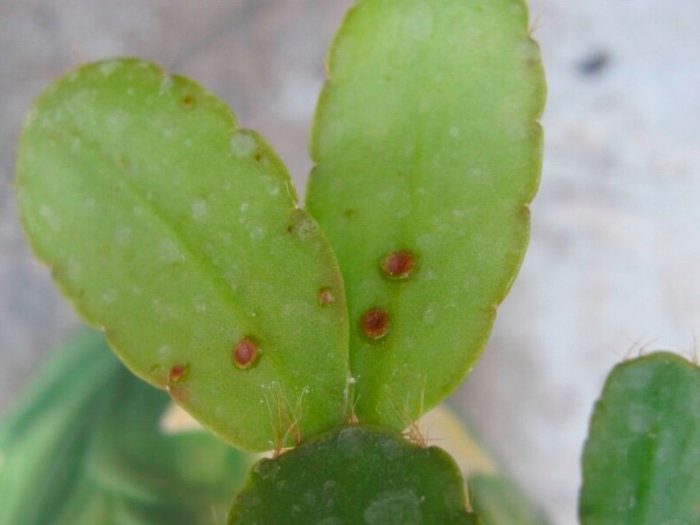 The appearance of a rusty coating on the surface of the bush may indicate that a spider mite has settled on it. It is a very small insect with a yellow, brown or pale red color, which is almost impossible to see with the naked eye. A tick appears where a very low humidity is observed for a long time. To destroy such a pest, the bush is sprayed with Fitoverm, Aktellik or Neoron.

If between the stems you saw white lumps that look similar to cotton wool, then this is a sure sign that mealybugs have settled on the flower. In order to get rid of them, treat the bush with a solution of Actara. 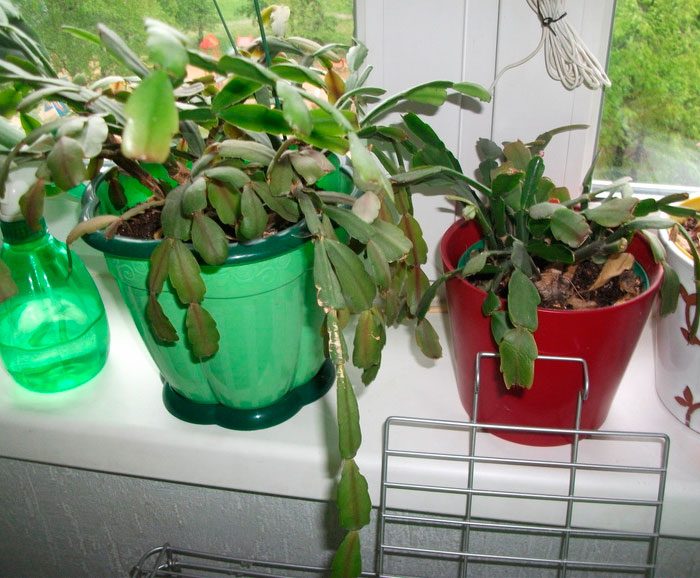 Incorrect care with zygocactus can cause problems, for example:

After the flowering of Schlumbergera ends, it should be rearranged in a cooler place and gradually reduce watering. The growing season of the flower begins in the last days of March, so at this time it needs to be rearranged to its usual place in the heat. Gradually increase watering and provide the plant with timely nutrition.

Types of Decembrist with photos and names 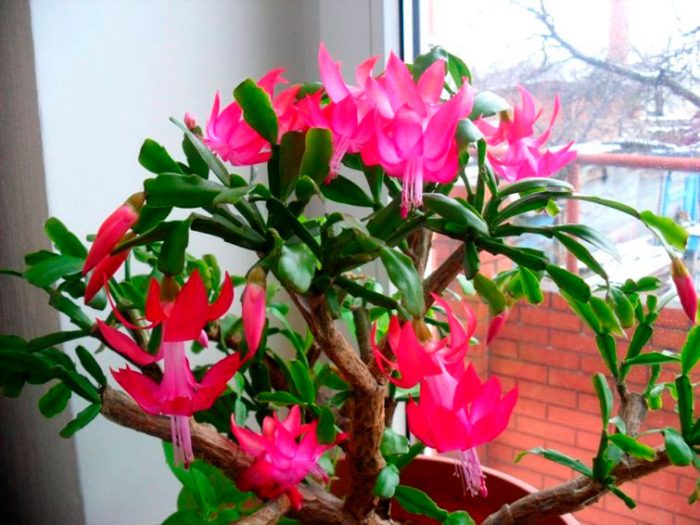 The Decembrist of the Buckley variety is considered the most persistent. It withstands well a change of scenery and some of the disadvantages of care. "Buckley" grows by 40-50 centimeters, it turns out a large and lush bush. The buds of the Decembrist varieties are large. They can reach eight centimeters in length.

Decembrist flower of the Buckley variety is distinguished by a variety of colors. They can be of various colors. But the leaves are always dark green.

This zygocactus blooms from November to March. Such a large period of formation of buds can not but rejoice. 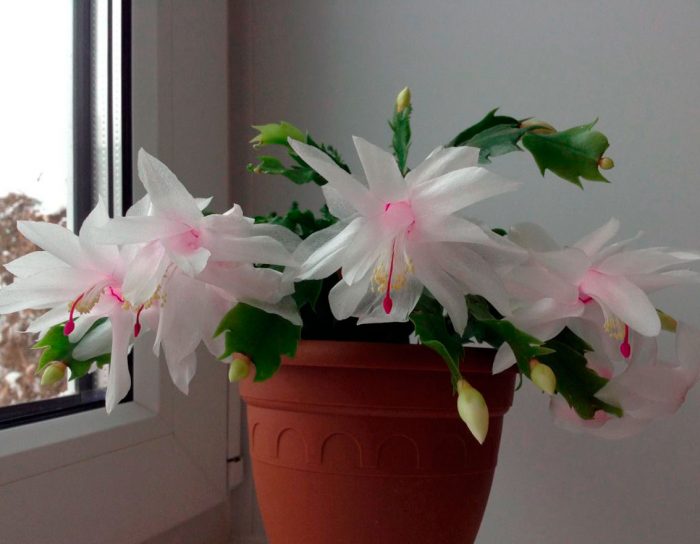 Decembrist varieties "White" looks very gentle and elegant at the same time. Usually such a plant blooms profusely. Sometimes under the buds are not visible stems and leaves. White flowers are large. 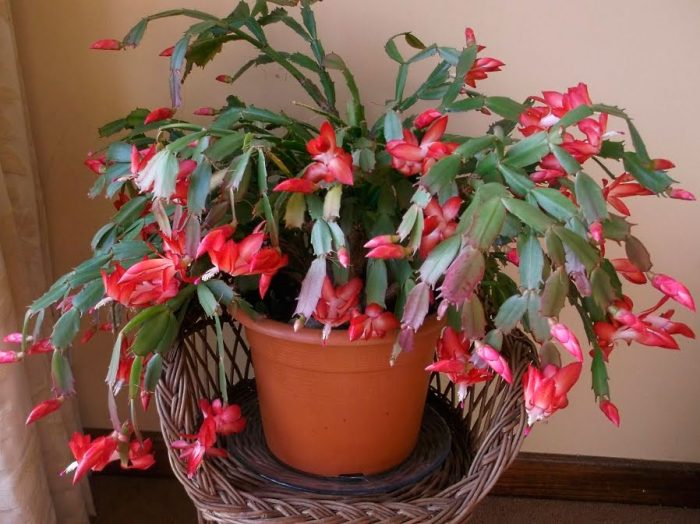 This species of zigocactus is characterized by light green pointed leaves and various colors. The stems of the plant reach six centimeters and have teeth on the edge.

The flowers of the Decembrist "Truncated" are two-tiered. They have petals bent back. The colors of such a zigocactus are very diverse. The buds can be purple, white, pink, orange and combined color. That is why this variety is especially popular. 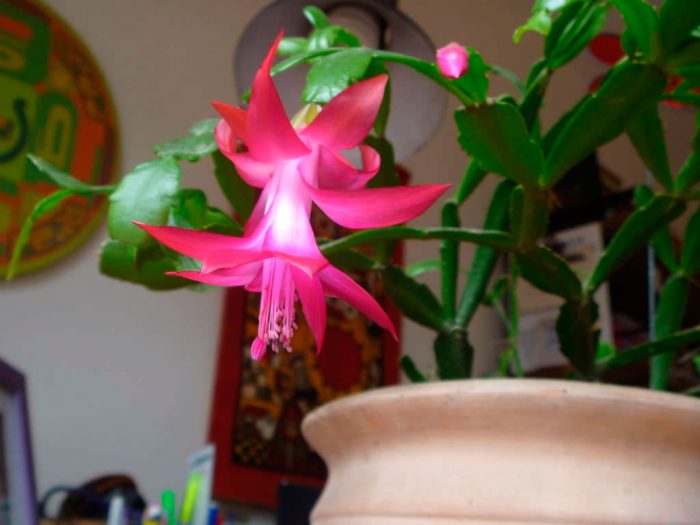 This Decembrist grows no higher than thirty centimeters. Its leaves are flat and glossy. It is worth noting that this variety of zigocactus has no needles, which makes it very cute. The peduncle tube of this plant variety is green. The buds themselves can be red, pink, purple. Short stature and an abundance of colors make the variety "Russeliana" very attractive. He will be able to decorate any room.

It is worth noting that Russeliana is also resistant to negative environmental factors. This makes it popular among the population, because an unpretentious plant is easier to care for. 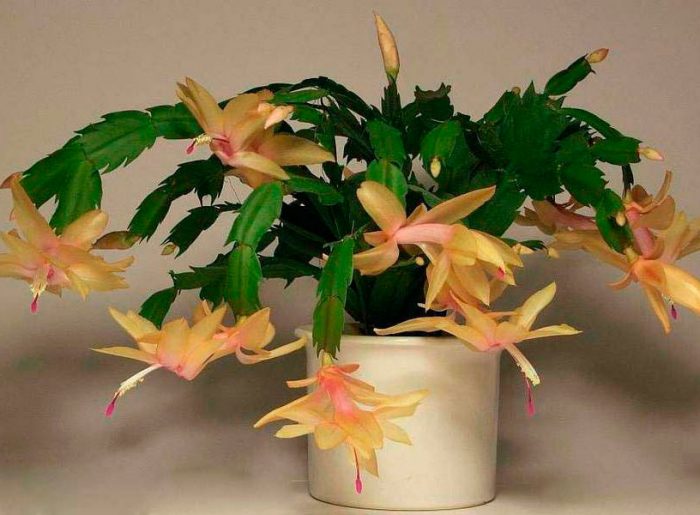 This Decembrist variety is very interesting. The fact is that it has yellow inflorescences. Moreover, their shade is gentle and pleasant, just the same sunny. It is worth noting that in nature, the Decembrists do not bloom yellow. But the breeders tried and brought this kind. They had to work for a long time, the task before them was not an easy one. Nevertheless, they managed to create a warm sunny Decembrist. 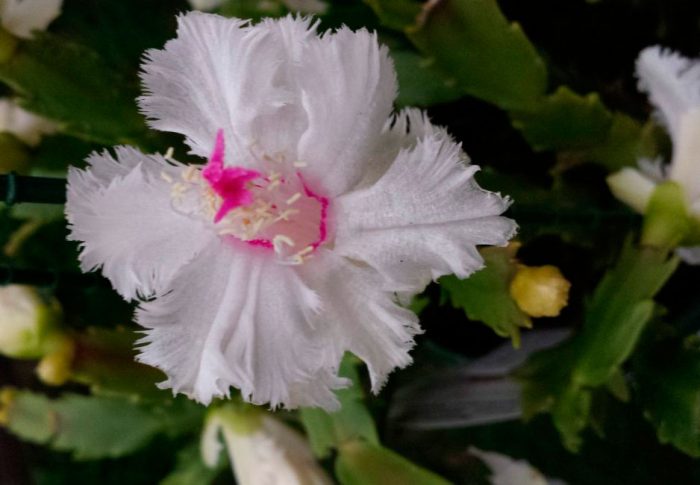 This zagocactus is terry. It blooms white and pale pink. The stamens of the plant are yellow. The Decembrist of this variety is a bit like cloves during flowering. It looks very solemn. Such a plant is well placed in a room where there is a lot of space and a flower can appear in all its glory. 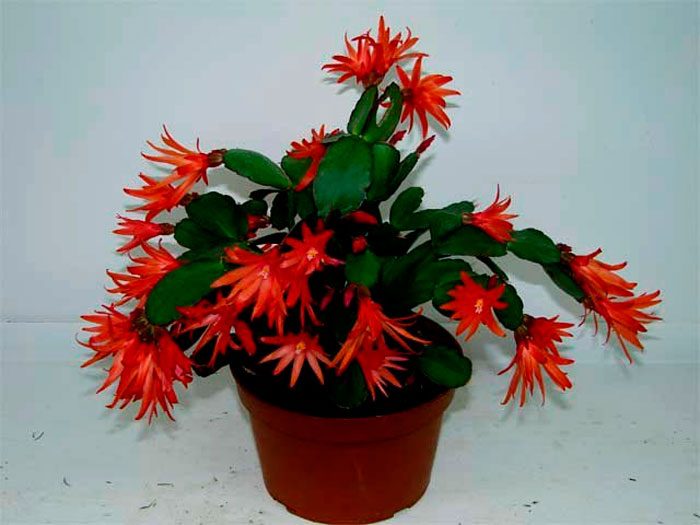 The Decembrist "Gertner" is very bright and beautiful. Its flowers resemble bells with pointed petals. The buds have a bright red-orange color. The leaves are dark green. This coloring contrasts sharply, which makes Gertner very noticeable and expressive.