The herbaceous perennial orchid dendrobium (Dendrobium) is a member of the Orchidaceae family. From Greek, “dendrobium” is translated as “living on a tree”, this is due to the fact that this plant is an epiphyte, but lithophytes that live on stones are also found among species of this genus. This genus unites more than 1200 species that can be found in the Philippines, Australia, New Zealand, Japan, China, Oceania and New Guinea under natural conditions. All these species can differ greatly from each other both in the form and color of foliage and flowers, and in the manner of arranging flowers on the stem, flowering time, and much more. 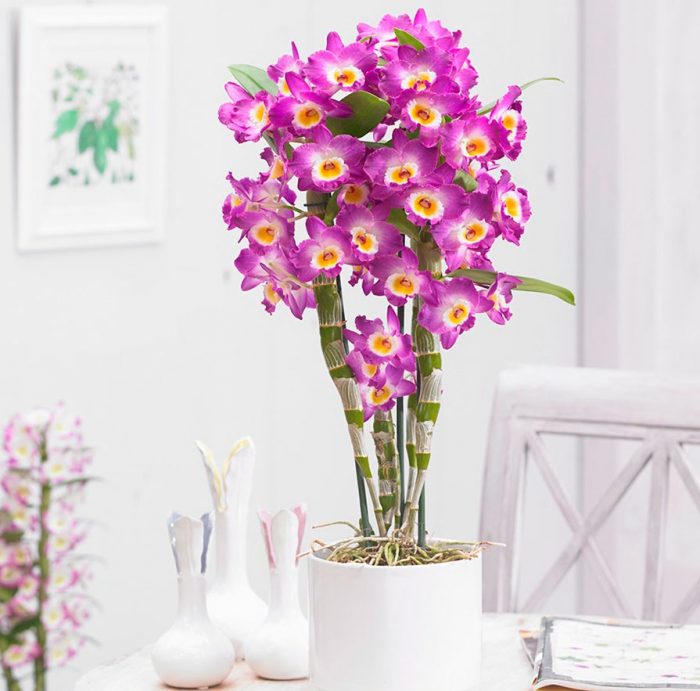 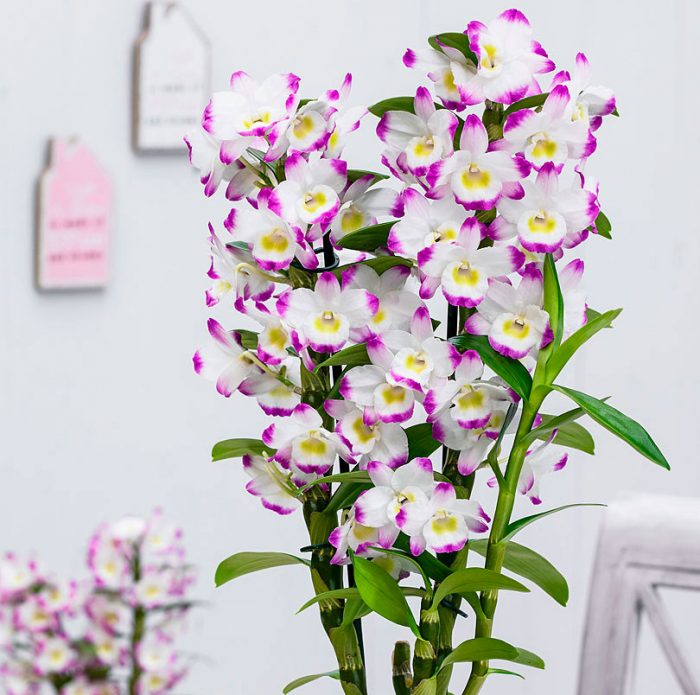 Since there are so many different types of dendrobium orchids that differ in agronomic technology, it is simply impossible to describe the rules for growing in room conditions for all types of such plants at once. The fact is that almost every species has its own “whims”, which must be taken into account when growing it. However, the dendrobium has several general requirements: 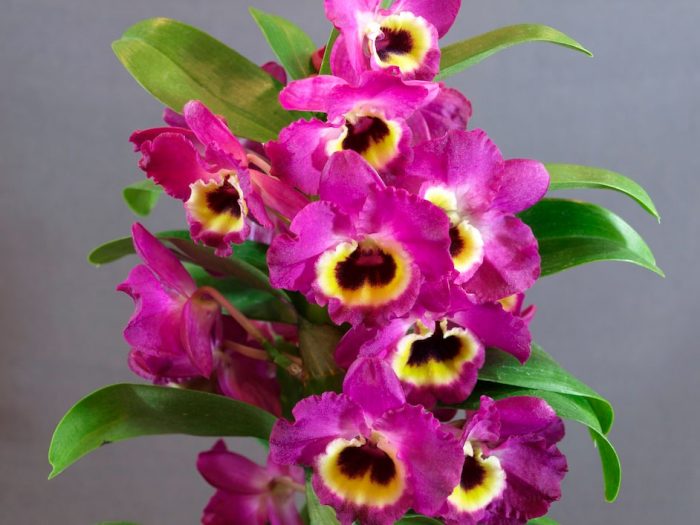 Most species, as well as varieties of this plant, need bright lighting, however, the flower must be protected from direct scorching rays of the sun. In order for it to grow and develop within normal limits, the daylight hours should be only about 12 hours. 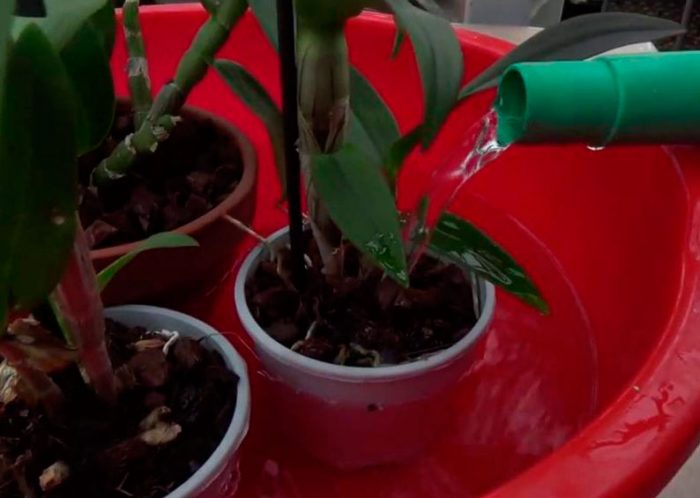 Dendrobium is watered in almost the same way as other types of orchids. In the spring-summer period, watering should be plentiful, but liquid stagnation in the substrate should not be allowed, as this can cause rot on the root system. It should be watered with filtered or well-settled water at room temperature.

Such a plant needs high humidity, the level of which should be from 50 to 80 percent. In order to provide the plant with the required humidity level in the summer, it is recommended to move it outside and moisten the foliage as often as possible. In winter, a container with a flower is placed on a pallet filled with moistened gravel.

Dendrobium transfers the transplants extremely painfully, so they are carried out as rarely as possible, about 1 time in 3 or 4 years. Blossoming species in spring time are transplanted as soon as they flower, and autumn blossoming - only when the growth of young shoots begins. The pot is chosen not very large, while it can be made of any material. Experienced flower growers, as a rule, choose unglazed flowerpots from clay, and those who grow orchids for the first time usually plant it in translucent plastic pots.

At the bottom of the container, you must definitely put a few heavy small stones to make it more stable. On top of the stones make a layer of drainage of polystyrene or expanded clay. Then a layer of bark of a large fraction is poured and the flower is carefully transferred into a new pot, all voids are filled with a new substrate. For planting orchids, experienced gardeners are advised to use a purchased substrate for orchids. As a rule, for planting such a flower, they take a mixture consisting of charcoal, sphagnum, pine bark and coconut chips. However, it can also be grown in a substrate consisting of only bark.

They feed the orchid only during intensive growth in April – September once every 15 days. To do this, use a liquid complex fertilizer for orchids. Please note that the concentration of the nutrient mixture used should be half as low as recommended by the manufacturer. If you use a nutrient mixture of a higher concentration, because of this, the root system may suffer, which will lead to the death of the plant. In addition to this general rule for all dendrobiums, varieties and types of warm content need regular feeding with potassium-phosphorus fertilizer even in the winter, they add this nutrient mixture to the substrate once every 4 weeks. At the same time, types of cool content are fed twice or thrice a month with nitrogen fertilizer. 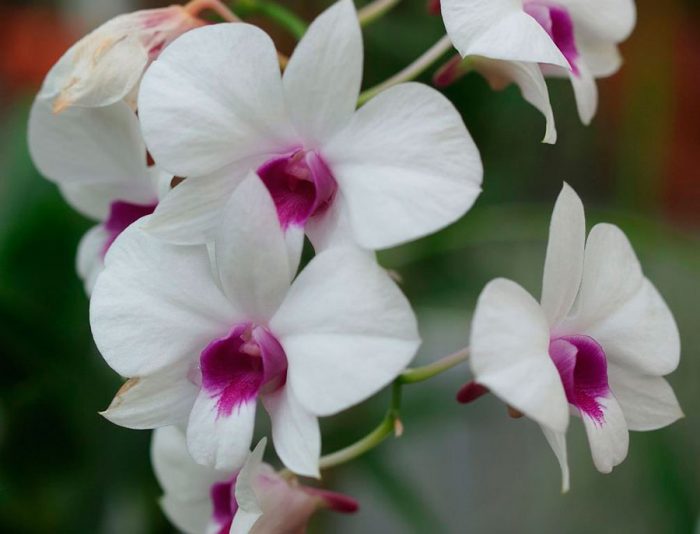 Rules for care during flowering

Each type of orchid dendrobium blooms at one time, while the duration of flowering can vary from 2 to 3 months. In order for the plant to bloom in a timely manner, a temperature difference of 5–7 degrees is recommended at night and in the daytime. The easiest way to achieve this is in the summer, and in winter it is complicated by round-the-clock heating of the room.

When growing dendrobium nobile in winter, in order to make it bloom, some gardeners resort to an unusual method. They do not water the bush until a new growth appears. When this growth reaches a height of 20-30 mm, and its own roots grow, watering of the flower resumes. After the growth is equal to the old bulbs, a gradual reduction of watering is carried out until it is completely stopped, while the temperature is reduced to 12 degrees. Watering is resumed only when the buds that have formed begin to bloom, otherwise children will develop instead of flowers.

After flowering is over, watering is gradually reduced to a complete cessation, the flower stalk is cut off, and the bush itself is transferred to a place where it is always cool. In this case, he will be able to have a good rest and gain strength before the new flowering. A dendrobium growing in nature does not stop growing even in winter, but in mid-latitudes during the cold season it falls into hibernation due to poor lighting, at which time growth stops. Of course, he will not die from this, but experts do not recommend allowing this. In winter, when daylight is very short, the bush must be illuminated, and it is best to use a phytolamp for this. The fact is that the orchid growing in nature has no resting period, it is constantly busy with something, as a rule, the flower grows either foliage, or roots, or peduncles. If your flower hibernated in autumn, then you should not disturb it. In this case, watering is temporarily stopped and the bush is transferred to a cool place. 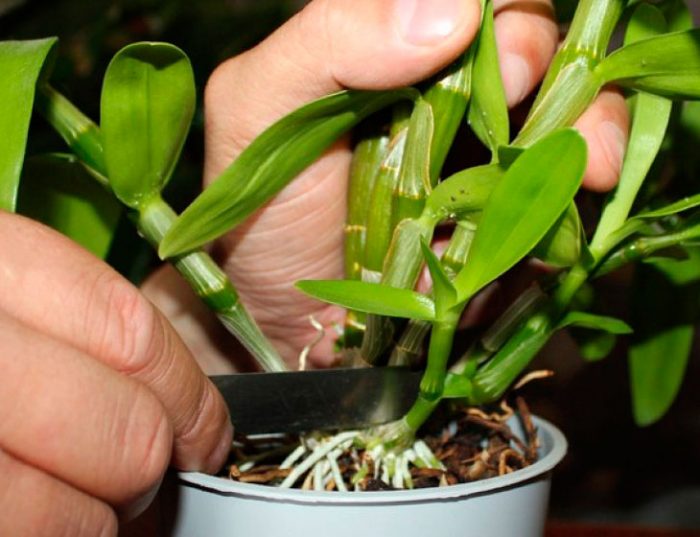 The dendrobium orchid grown in room conditions can be propagated by dividing the bush. Plant division is carried out during transplantation after it fades. An adult large bush is removed from the container and divided into parts after the root system is freed from the substrate. In this case, for starters, you need to carefully untangle the roots, and then those that are very tangled up are cut with a sharp disinfected tool. During the division, one must take into account that on each divide there should be 2 or 3 mature bulbs and the same number of young growths. Places of cuts are treated with garden varieties or sprinkled with coal powder.

Cut a pseudobulb from the parent bush and cut it into cuttings, the length of which should be about 10 centimeters. Places of cuts are coated with garden var. Take a tight-fitting plastic bag and fill it with moistened sphagnum. Place one or two cuttings in each bag, then they are tightly fastened and cleaned in a warm (from 22 to 25 degrees) and well-lit place, keep in mind that the light must be diffused. Every day, ventilate the cuttings and make sure that the sphagnum is always moist (not wet). Rooted cuttings after 15-20 days, after which they can be planted in separate pots. The bushes grown from them for the first time will bloom after 2 or 3 years.

Types of dendrobium with photos and names 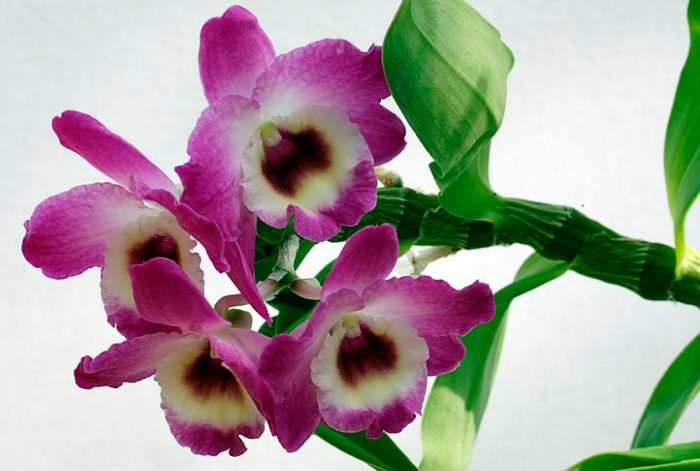 This species is one of the most beautiful, it comes from Vietnam and the Himalayas. The length of the shiny thick pseudobulbs is about half a meter, in the second year of growth they form peduncles, on which 1-3 large (about 10 centimeters across) of a flower of saturated color are formed. In the natural species, the petals are white and have pale purple tips, the color of the lips is creamy with pink bordering, and the throat is dark purple. Flowering in hybrid varieties can be observed several times a year. 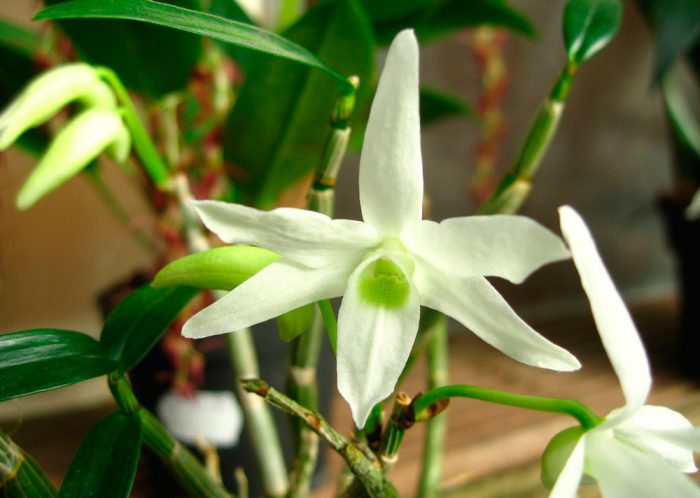 This species is Japanese endemic. It is a small copy of the noble dendrobium, the height of the bush is only about 15 centimeters. This species, in comparison with the others, is less demanding to care, so it is recommended to pay attention to inexperienced gardeners. This epiphyte hails from the Eastern Himalayas. Its lush, lush, racemose inflorescences reach a length of about 0.3 meters; up to 50 very fragrant flowers can form on them, the sepals and petals of which are rich yellow, and the lip is orange-yellow, furry and fringed along the edge. This species has a variety - Dendrobium thyme (Dendrobium thyrsiflorum): its petals are painted in cream or white. 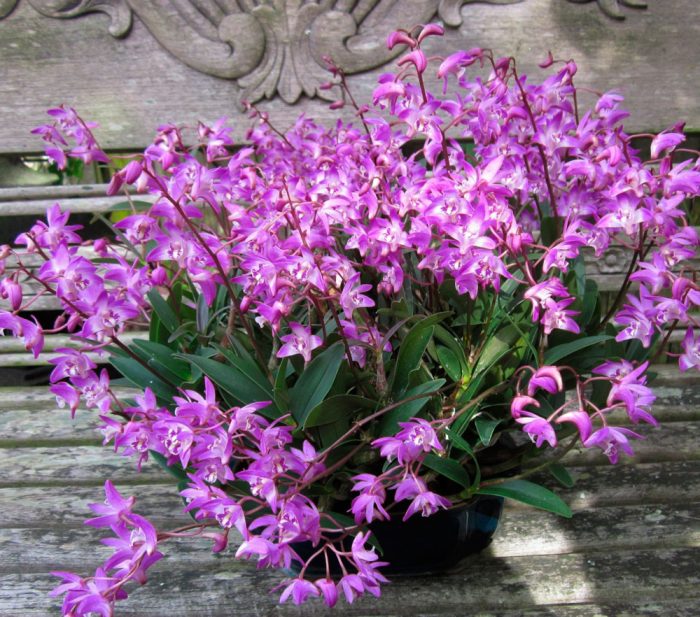 The birthplace of such a plant is Australia. Almost cylindrical stems are thickened in the lower part, and in the upper - they form wide leaf plates. On a peduncle grows 5 or more fragrant pinkish flowers with a spotted lip. Bush growth continues throughout the year, and flowering is observed in February – March. 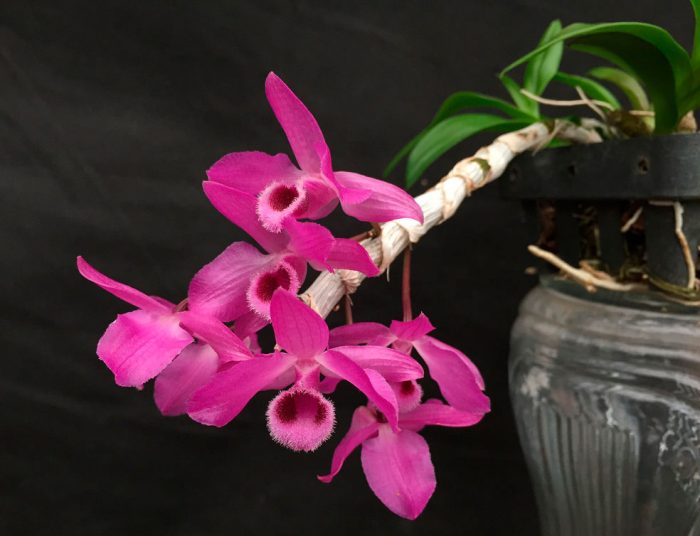 In this epiphyte, hanging shoots in length reach about 0.3 meters (sometimes more). The length of the leaf plates is from 7 to 12 centimeters, they are pointed and have an oblong-lanceolate shape. Amethyst-purple single flowers have a heavily pubescent rounded lip with brownish-purple spots. The column is white and the duster is purple. Flowering is observed in June – July. 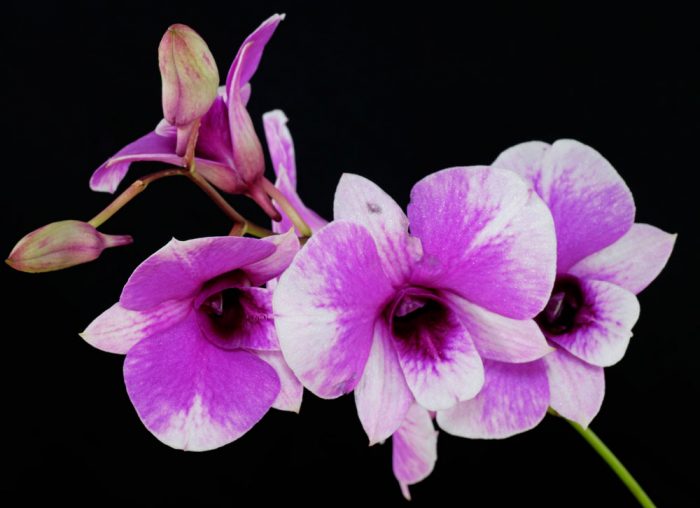 In nature, this species is found in Australia, its flowers are very similar to the Phalaenopsis orchid, which influenced the choice of name. The length of the pseudobulbs with powerful leathery leaf blades is about 0.7 m. At a high peduncle, about 10 (sometimes more) large burgundy flowers are formed up to 80 mm across. Each of the flowers blooms for about 8 weeks, while the old pseudobulbs can bloom several times. The bush blooms in November – December.

It is best suited for beginner florists to look like a dendrobium phalaenopsis or a noble dendrobium.