The Poliscias plant is part of the Araliaceae family. In nature, it can be met on the territory of Southeast Asia, as well as on the islands of the Indian and Pacific Oceans. This genus unites more than 100 species, and most of them are cultivated at home. The closest relatives of this plant are ivy, fatsia and their hybrid varieties: anxiety, oreopanaks and tetrapanaks. 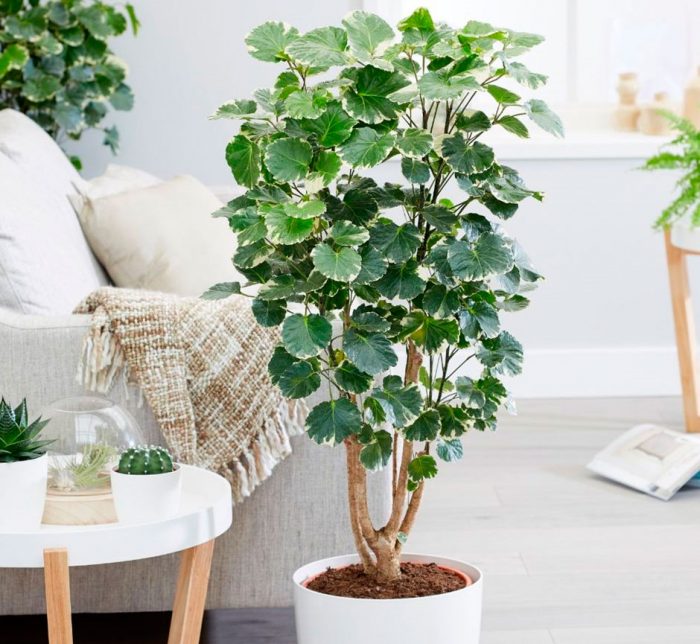 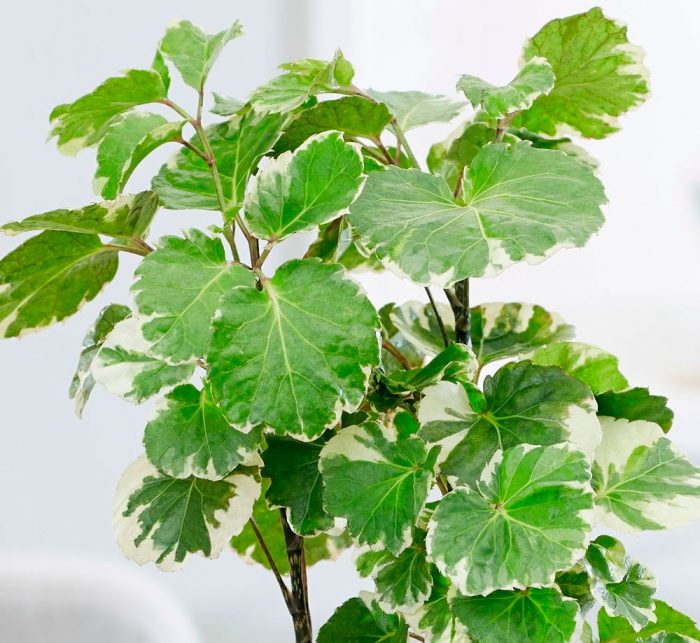 The branched root system of poliscias grows horizontally and vertically. Highly branched stems are covered with a bark of a brownish color. Over time, their lignification occurs, but they still remain very flexible: the stems are extremely difficult to break, but they can be tied into a knot, and then straightened. As the growth is observed, the lower part of the bush is exposed. Regularly located short-leaf leaf plates are painted in a saturated or pale green color, they are round, lobed, thrice-pinnate or paired-pinnate, simply glossy or leathery. Polyscias has variegated varieties that are very popular among gardeners. While the bush of its young foliage, as a rule, has a simple form, however, over the years, it is divided into segments. During flowering, inflorescences are formed on the bush, having a capitate or umbrella-shaped. But when cultivated at room temperature, such a plant blooms extremely rarely. 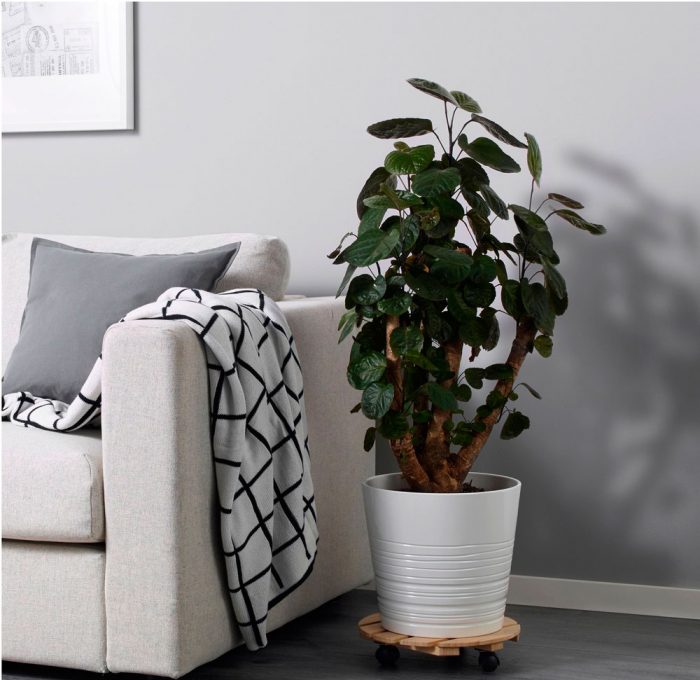 Poliscias, growing both in nature and at home, needs bright diffused light. Moreover, he needs a large amount of light both in the warm season and in winter. Such a flower grows well in slight shading. When choosing a place, it should be borne in mind that green-leaved species normally grow in light partial shade, however, varieties with variegated foliage need a lot of light to maintain their bright color.

Best of all, during the growing season, this flower grows at an air temperature of 20 to 23 degrees. In winter, it is recommended to rearrange the bush in a cooler place (from 17 to 20 degrees), which is located away from working heating appliances.

If the plant is on the windowsill, then foam should be placed under the container, which will protect the roots from hypothermia. And to protect the bush from the flow of hot air that rises from the radiator, use plastic or glass.

Remember that such a plant reacts extremely negatively to stale air, so you need to ventilate the room where it is located regularly all year round. But at the same time protect it from the draft. 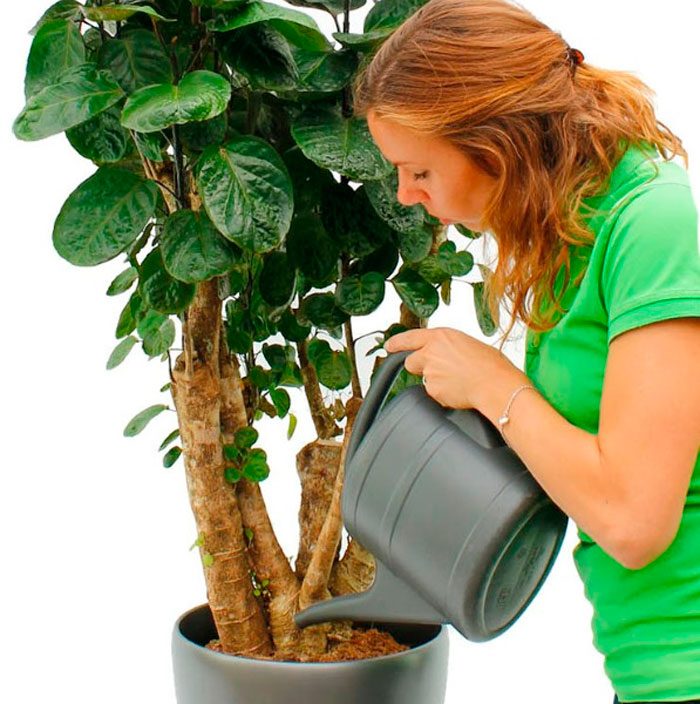 Moisturize the soil mixture in a pot moderately, but often immediately after its top layer dries. In the cold season, when the surface of the substrate in the tank dries, wait another two or three days and only then water it.

A flower needs a high level of air humidity, so it must be systematically moistened from a sprayer. For irrigation and spraying use well-settled water, the temperature of which should be slightly higher than room temperature. To soften hard water, it is mixed with several crystals of citric acid or drops of lemon juice. In order to increase the level of air humidity, open vessels filled with water are placed near the flower. Instead, you can take a pallet filled with wet expanded clay or pebbles, and put a flower pot with polysias on it, but make sure that the bottom does not come into contact with the liquid. If you have an aquarium in your room, then put a flower near it. Experts advise to systematically rinse foliage under a warm shower.

Fertilizer in April – October is applied to the substrate once every 15 days. To fertilize this flower, mineral fertilizer is used for decorative and deciduous houseplants. At the same time, from October to April, polysiasis is also regularly fed, but already once every 30 days. Ready-made organic solutions can also be used for top dressing; they can be purchased at a specialized store. 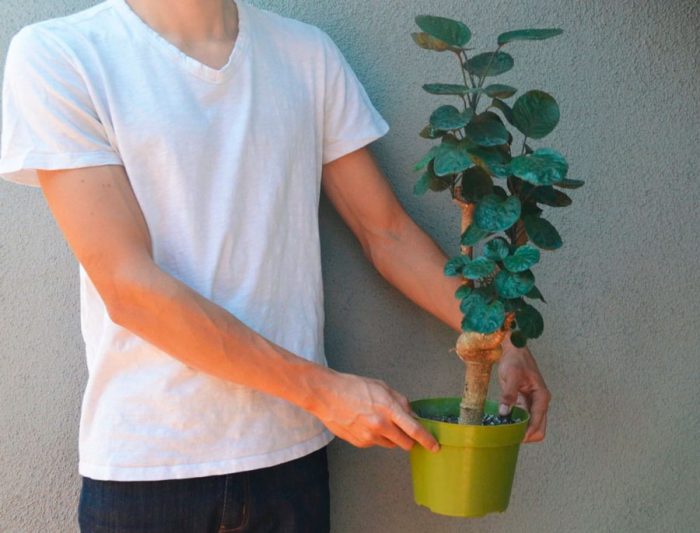 While the young bush it is transplanted systematically 1 time per year, and more adult specimens - 1 time in 2 or 3 years. A great time for transplanting is early spring, the beginning of the growing season. The mixture suitable for transplantation is composed of humus, coarse river sand, peat, leaf and soddy soil.

To begin with, make a good drainage layer at the bottom of the new pot, for this, take fragments of clay shards or expanded clay. For transplantation, use the transshipment method, pre-moisten the bush abundantly, in which case it will be much easier to pull it out of the pot, while maintaining a whole lump of land on the root system. Transplant the flower into a new container, and cover the whole empty space with prepared soil mixture. Water the transplanted bush well and exclude any top dressing for at least 30 days.

At the bush that has begun to grow intensively, they pinch the stems to stimulate branching. Poliscias is great for hydroponic cultivation. 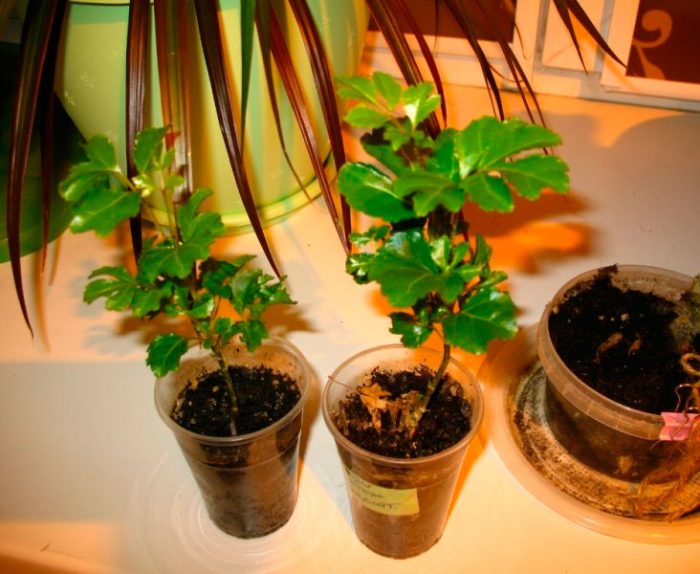 As a rule, apical or stem cuttings are used to propagate indoor polysiasis. Many plants can be propagated by cuttings quite easily, but not polysiatus. The fact is that if everything is done correctly, then the roots on the cuttings can grow back, but it will take a very long time. After suitable cuttings are cut, the places of cuts in them are sprinkled with charcoal crushed to a powdery state. Allow the slices to dry at room temperature and only then plant the cuttings for rooting. To do this, they are planted in a mixture of coarse sand and peat (1: 1), on top they should be covered with a transparent cap (for example, a bag or a glass jar), in this case it will be much easier to maintain the high level of air humidity necessary for rooting.

The container with the cuttings is placed in a warm place (about 25 degrees), do not forget to regularly ventilate in the morning and evening, if necessary, moisten the cuttings from the spray gun and water them. They will take root for at least 30 days.

Pests and diseases of poliscias 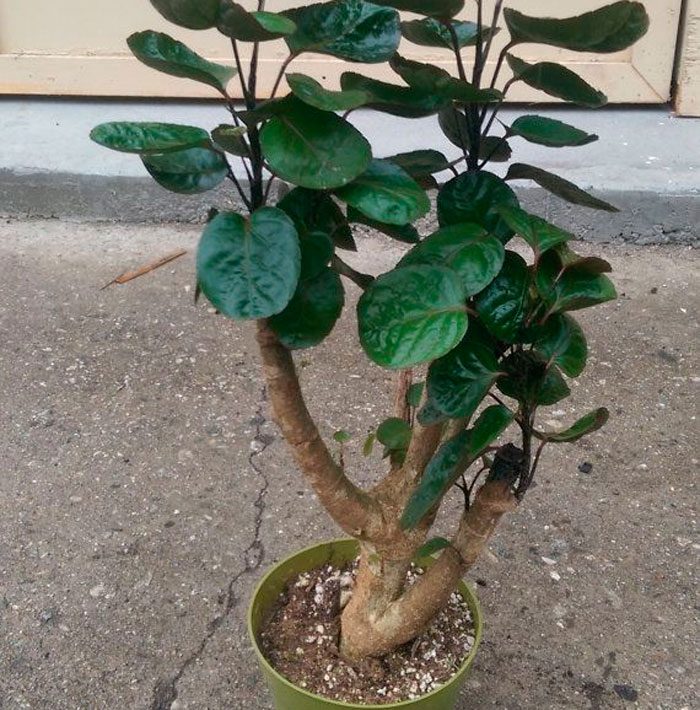 Polysiasis, grown at home, gets sick only if he is improperly looked after. For example, if the humidity in the room is excessively low, then the edge of the sheet plates turns brown and they begin to fly around. Also, falling of foliage near the bush can be associated with drafts or with excessively high air temperature. In some cases, foliage can begin to fly around, because the plant is aging and this is a completely natural process, which should not cause concern.

Poliscias is highly resistant to infectious diseases, but if water stagnates systematically in the substrate, then the roots may rot. What to do in this case? Remove the flower from the container and remove the entire soil mixture from its root system. Cut out all the rotten areas with a sharp sterilized instrument, while grabbing a small portion of healthy tissue. Sprinkle the places of cuts with coal powder and plant the bush in a new soil mixture. At first, it is recommended to use a pinkish solution of potassium permanganate or a solution of Fundazole for its irrigation. Do this until the bush becomes completely healthy.

On a recently transplanted or very weak bush, aphids, scale insects or mealybugs can settle. All these pests are sucking, they pierce young shoots and foliage, and suck out vegetable juice from them. To combat harmful insects, a solution of any suitable insecticide is used, however, immediately before processing, remove shields or worms from the bush using a cotton swab moistened with alcohol. After that, the bush is thoroughly washed under a warm shower and only when it dries thoroughly, it is sprayed with a solution of Actellik, Fitoverm, Aktara, Decis or another insecticidal agent of similar action.

Quite rarely, root nematodes settle on such a plant, which is why its development and growth become very slow. The bush begins to fade and after some time dies. It is impossible to get rid of such a pest, which is why cut off cuttings from the bush for rooting, and destroy it along with the substrate.

Types and varieties of poliscias with photos and names

Below, those types and varieties of poliscias that are most popular with gardeners will be described. 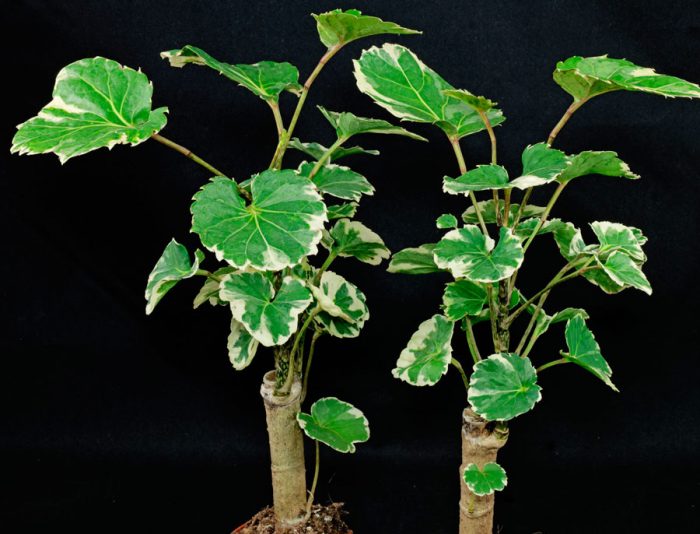 This shrub type evergreen plant has a curved main trunk (like Bonsai) and thin erect lateral branches. This plant has many glossy whole leaf plates, painted in green and having a white border. Young leaves are rounded, but over time they become thrice dissected. The variety Marginata is most widespread in culture: the edge of green leaf plates is decorated with small cloves and a wider border of white color. 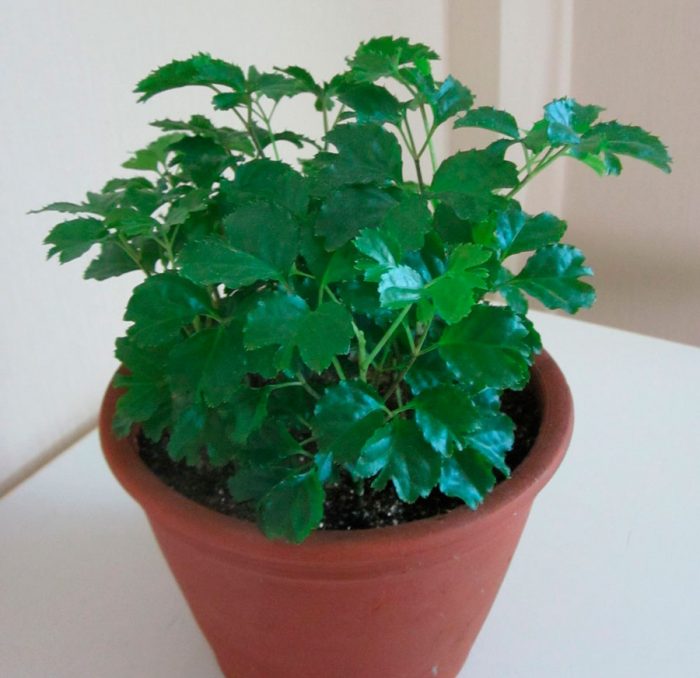 This species forms not very tall bushes, its stems are completely covered with foliage. Saturated green leaves have a white border. While the leaf plates are young, they have a rounded shape, but as they age, it changes to twice or thrice dissected, and spots of yellow color may appear on the surface. The best varieties: 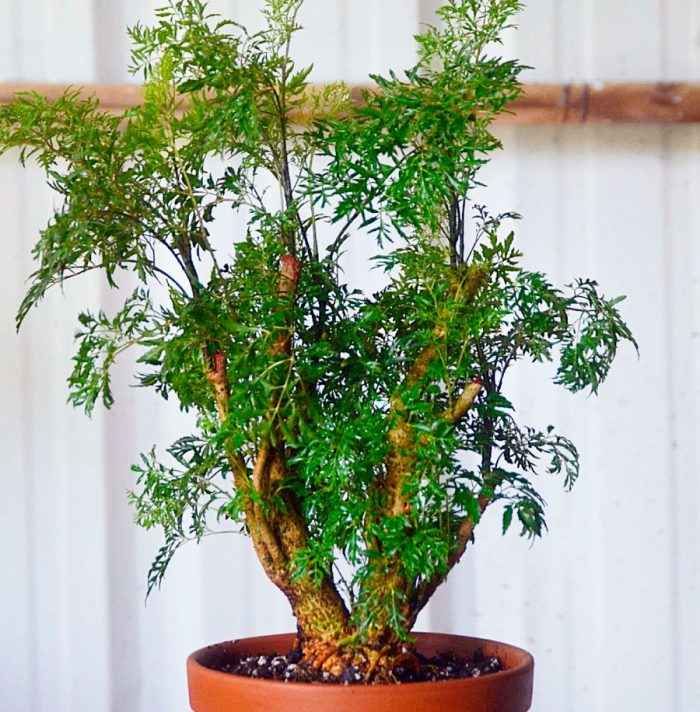 This species differs from all others cultivated at home in its high decorativeness; externally it looks like a fern. On the surface of young stems there are convex lentils. Vaginal double- or thriceous leaf plates consist of serrated dentate-serrated leaflets, the shape of which can vary from lanceolate to round. During flowering, apical inflorescences appear, consisting of unattractive flowers of small size. The best varieties: 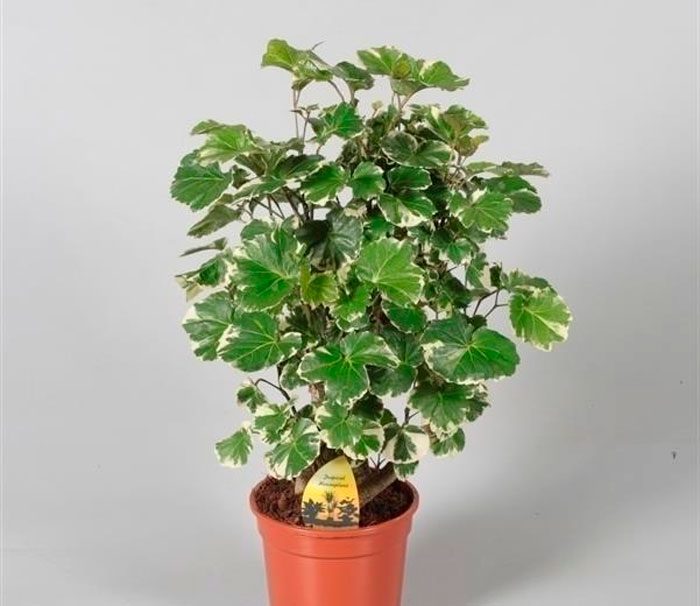 Or poliscias balfuoriana. This evergreen plant does not branch very strongly, and in height it reaches about 150 cm. Dark green long-leafy leafy lobes are lobed, pinnately dissected, almost rounded, in diameter they reach about 70 mm. Along the edge of the plate there is a border and spots of white color. Popular varieties: 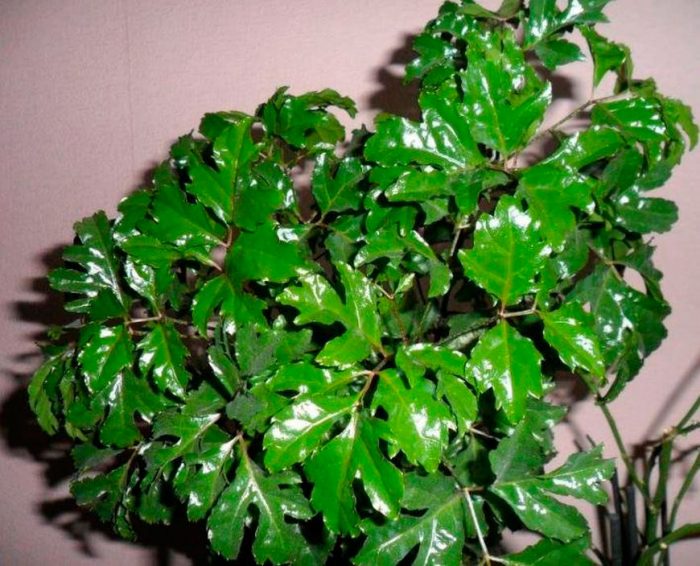 The composition of complex leaf plates includes three-lobed rounded leaves that resemble oak foliage in shape. Because of this, this species in foreign literature is often referred to as “Oak Leaf” (oak leaf). 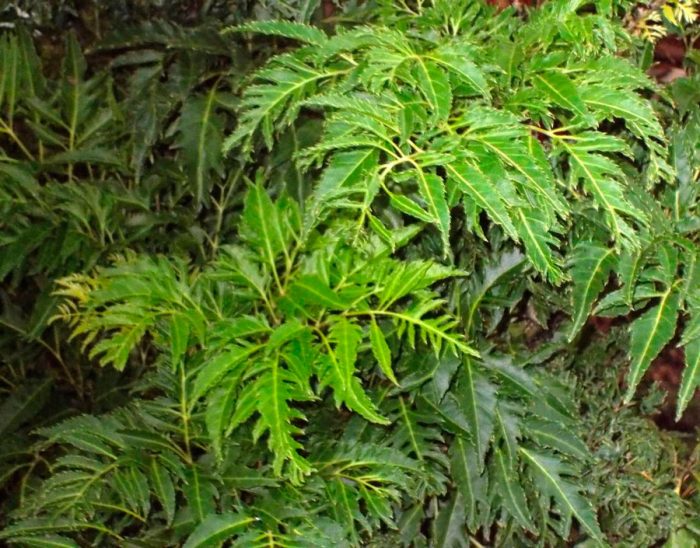 This shrub, which is evergreen, has long, cirrus-dissected leaf blades of green color that are similar to fern fronds. The length of the foliage varies from 0.3 to 0.5 m, while the lobules are densely arranged. 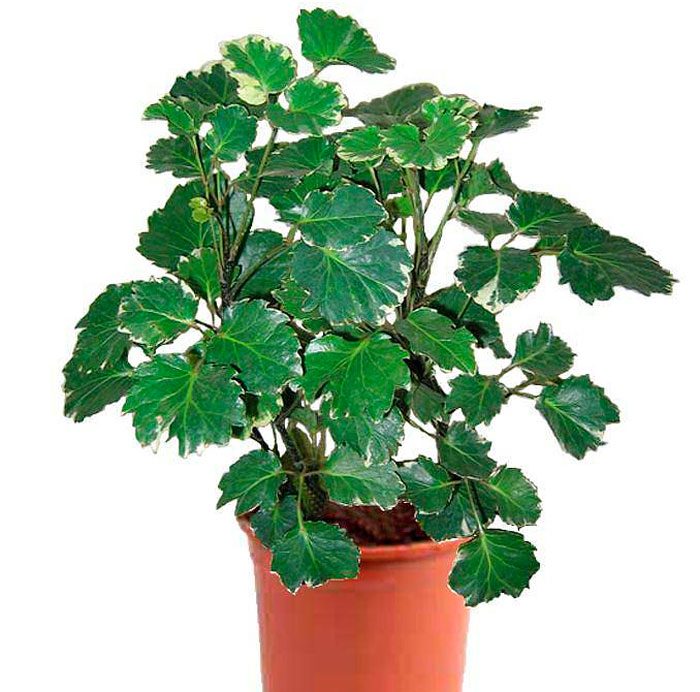 Such a stunted shrub is decorated with lush cirrus-dissected foliage of greenish color, which reaches a length of 15 to 20 centimeters. Variety - Variegata is widespread: a thin border of a golden hue is located along the edge of the foliage. 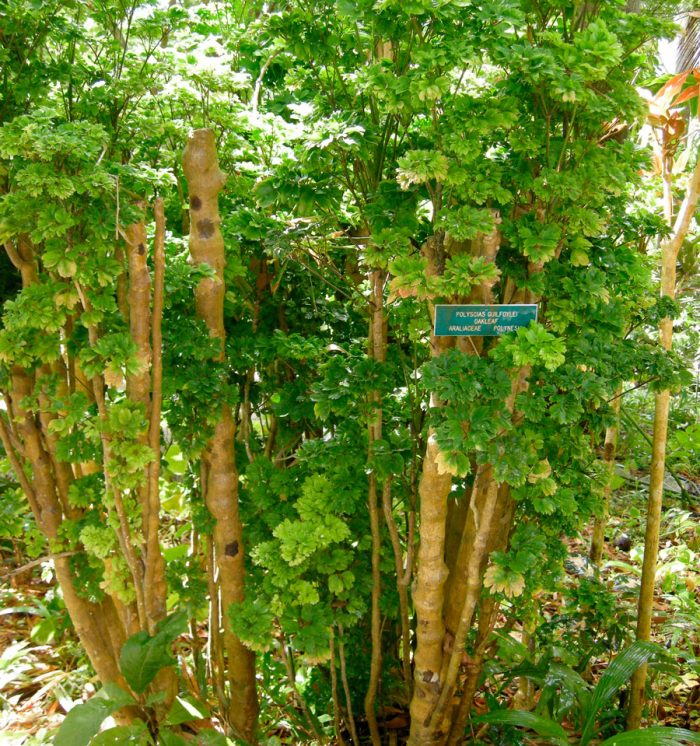 This species is very popular among gardeners. This branched shrub has unpaired pinnate-complex large leaf plates, which consist of green leaves of a lanceolate-oval shape along the toothed and bordered with a yellow or white strip. The best varieties: