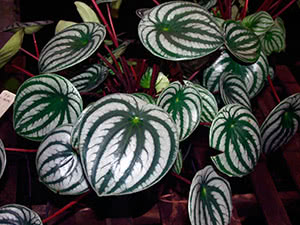 Peperomia (lat. Peperomia) - a representative of plants from the pepper family . At the moment, more than 1000 species of peperomia are already known, which under natural conditions grow in the tropical zones of America. The name of the plant consists of two words: peperi (Greek) - pepper, and homois (Greek) - similar.

Representatives of peperomia are shrubs, evergreen perennials or annual grasses. The shoots of plants are thick, the leaves are leathery, dense, located opposite to the entire stem. The plant is grown as a decorative foliage, although peperomy blooms in small flowers.

The plant is grown both in room conditions and in gardens (create special conditions). Some types of peperomia are interesting not only in leaves, but also in flowers, but flowering can be achieved by growing with a “short day”. Some species are grown as ampelous plants. The plant is great for creating flower arrangements.

Planting and caring for peperomia

Read more about growing peperomia below

See large photos of peperomia with the name of the genus and species. Opens in a new window!

Room peperomia needs bright lighting, but direct sunlight should not be allowed to fall on the leaves. When grown on the south side, the plant is placed either in the back of the room, or scattered light with paper. When grown on the west or east side, shading is not required. There may be little light on the northern windowsill and you will have to resort to artificial lighting. Forms of peperomia with green leaves are shade-tolerant, and with variegated ones, they need more bright light. In winter, lighting should also be bright.

The temperature should be average throughout the year. In summer and spring, peperomia feels best at home at a temperature of about 22 ° C. In winter, the temperature is reduced literally by a couple of degrees, but a decrease below 16 ° C can lead to diseases. Only some types of home peperomia can be taken outside, so it’s better not to risk it, because drafts are harmful to the plant.

Peperomy is watered at home during the growing season, water is taken mild, a couple of degrees warmer than room temperature, well-maintained. In autumn and winter, watering is reduced, using the rule “it is better to underfill than overfill”, since excess moisture in the soil leads to root decay, which is always difficult to fight. If the leaves of peperomia fade and fall, then this indicates insufficient watering.

For the plant peperomia, air humidity is not an important point in care. Spraying can positively affect the development of the plant, and their absence at least will not do harm. Spraying from June to August will be helpful.

Fertilizers use complex minerals for indoor plants. Peperomia is fed in the spring-autumn period every two weeks, and once every winter month.

The top of the shoots can be pinched, which contributes to a better branching of peperomia.

The pot for transplanting peperomia in a room is taken shallow, while with each transplant the next pot must be taken 2-3 cm wider in diameter. Expanded clay or broken bricks are poured at the bottom of the pot, and on top is an earthen mixture consisting of two parts of leafy earth, and one part humus, sand and peat. Peperomia is transplanted up to three years of age annually, and after that - every two years.

Sow seeds in March-April. To begin with, it is necessary to prepare a mixture of equal parts of sand and sheet soil, this substrate is poured into bowls, into which the seeds of peperomia are then sown. The container with crops is moistened (you can spray the soil or pour water through a fine sieve), cover with glass or cellophane, the temperature is kept at 25 ° C. Glass or film is removed from time to time, aerated capacity and moisten the soil. When a second developed leaf appears on the seedlings of the peperomy flower, the seedlings dive into a box with the same substrate at a distance of 2 cm from each other. Lighting should be bright and long-lasting, but without direct sunlight. When the plants harden, they are planted in individual pots of 7 cm in diameter. A drainage layer is poured on the bottom of the pot, and on top is a substrate of sand, soddy ground, leaf and peat (1: 1: 2: 2). Then they look after adult peperomia.

Propagation of peperomia by stem cuttings

For the cuttings of an indoor flower, peperomies comprise a mixture of equal parts of sand, peat and humus. Cuttings are suitable both apical and stem. Depending on the length of the internodes, it is necessary that the handle has from one to three knots. Cuttings take root both in water and in the substrate (see above). Cuttings are planted in the soil and covered with glass, the temperature is maintained at 25 ° C, and in less than a month the cuttings should take root. Peperomia cuttings are planted in individual pots, and care is carried out as for adult specimens.

To propagate home peperomia with a leaf, you need a sharp knife, and preferably with a blade, cut a healthy leaf (there should be no signs of illness, no pests, no damage). Leaf petiole is left short. The leaf is planted in a mixture of peat and sand, put in water or rooted in living sphagnum moss. Faster and more likely rooting will be successful in the greenhouse. Water needs to be changed every 1-2 days. After 3-4 weeks, the peperomia leaf will take root, after which it is transplanted into a pot of 7 cm in diameter. When the plant hardens, it is routinely cared for.

Reproduction of peperomia by division

If the bush of peperomia has grown greatly, it can be divided into 2-3 small ones. Do this in the spring, combining a transplant with a division of the root. Separate the plants carefully so as not to damage the root system. The soil is taken as described in Transplant (see above). We put drainage at the bottom of the pot, the pot itself needs to be taken a little smaller.

Diseases and pests of peperomia

Peperomia leaves fall. The most common options: either keeping the plant at a low temperature, or inadequate watering (drying out an earthen coma).

The edges and ends of the peperomia leaves turn brown. In peperomia, these are signs of sudden changes in temperature (a sharp decrease). Another reason is that the plant is in a draft, this should not be allowed.

The leaves and stems of peperomia rot. The reason for this is excessive soil moisture. Symptoms are more likely to occur if waterlogging is accompanied by content at temperatures below 16 ° C.

Peperomia leaves fade, wrinkle. Peperomia should not be in direct sunlight. Location on the southern windowsills can also lead to burns on the leaves.

Pests of peperomia. Peperomia with improper care can be easily affected by ticks, thrips , nematodes, scabies and mealybug. How to deal with them, read the pests section (see the Plants menu item at the top of the site).

Natural habitat - Ecuador. Representatives of the species are herbaceous perennials. The plant stem is pubescent, straight, vertical, dark red. Leaf petioles are short (up to 1 cm long). The leaf plate is round in shape, green, five to seven veins of light green color go from the top of the leaf to the top, depending on the variety, the leaves can be either bare or covered with small hairs, the leaves are arranged alternately on the shoot. Flowers - 7-centimeter spikelets appearing from the leaf sinuses or at the ends of branches.

Distributed in Venezuelan rainforests. Representatives of the species are herbaceous perennials. The leaves of the species are dense, petiolate, sessile, dark green with a slight shade of red, located on the shoot in turn, the leaf plate reaches 15 cm in length and a maximum of 8 wide, the edge of the leaf is purple, the top of the leaf is usually dull, the base is wedge-shaped.

Variegata has variegated and less dense leaves. The edge of the leaf is reddish in color, closer to the center - the leaf is yellow, and near the vein itself it becomes dark green. It does not occur in nature.

This species is a grassy branched perennial with red thin shoots. The leaves on the shoots are arranged on 4 leaves opposite, the upper side of the leaf plate is green, and the lower side is red, small in size, have an elongated-oval shape. The plant is very decorative.

The native land of this species is the tropical mountain forests of the South American continent. Representatives of the species are herbaceous perennials. Shoots are green, covered with brown spots. The leaves are dark green in color with white veins, grow from the root, grow to a length of 20 cm, ovate, shiny, fairly dense. Inflorescences have a brown tint, rather long.

It grows in Brazil. The representative of the genus is a grassy short perennial, grows densely. The leaves are heart-shaped, green in shape with brownish veins extending from the base of the leaf toward the apex.

This epiphytic perennial in nature grows in marshy forests in the tropical zones of the American continent. Shoots can be hanging, and vertical, and lying. Petiole leaves, the base of the leaf plate has a heart-shaped recess, and the sheet itself is flat-ovate, can be pure green or have a colorful color. Leaves on the shoots are arranged next. Grow as an ampel plant.

Grows in the rainforests of South America. The plant is epiphytic, perennial. Shoots are densely covered with hairs. The leaves are located on the shoots opposite three to four pieces, small (up to 4 cm long and 1.5 cm wide), oval. The bottom plate is red in hue, and the top is green.

It grows in Brazil. Herbaceous perennials or shrubs grow up to 0.5 m in height. Shoots are densely covered with hairs. Rounded leaves grow up to 50 mm in diameter, dense, covered with white hairs, the leaf plate itself is green, slightly tapering to the apex.

Habitat - Brazil and Venezuela. Stemless epiphytic or terrestrial perennials. Petiole leaves, petioles up to 10 cm long, with a red tint, grow from the root. The leaves are not pubescent, dense, fleshy, shiny, with 7-9 green veins, between which there are whitish stripes.

This species comes from Brazil. The plant is low, only up to 10 cm. Petiolate leaves, grow from the root, as if rosette. Petioles are ribbed, pale pink. The leaves are covered with veins, which are concave on the upper side of the leaf and strongly convex on the lower. Leaves are green, veins are brown. Flowers - spikelets of white color, appear in the summer months. The plant is grown not only as a decorative foliage, but also for the sake of flowers.

Natural habitat - tropical areas of the South American continent, grow both on land and on trees. Representatives of the species are herbaceous perennials. Shoots are not pubescent. Petiolate leaves, arranged alternately on shoots, dark green in color, ovoid (taper to the base and expand to the apex), up to 8-12 cm long, and up to 4-5 cm wide, fleshy and dense. A large number of forms and varieties are grown in culture.