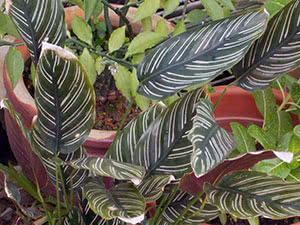 The Spanish conquistadors brought this South American plant to Europe from their campaigns. Calathea, like its relative, the arrowroot, gained wide popularity due to its incredibly beautiful patterned leaves, reminiscent of the colors of the plumage of strange birds.

A healthy and well-groomed calathea will not only decorate your home, but will also be able to neutralize aggressive energy in it and bring harmony to your home.

You will find answers to these and other questions in our article.

Planting and caring for calathea

Read more about growing calathea below

The calathea plant (lat. Calathea) is the most numerous genus of the Marantiidae family, with up to 130 species that naturally grow in Central and South America. The name of the genus comes from the ancient Greek word Kalathos, which means “basket”: baskets were really woven from the leaves of calatas. But today, calathea flowers have not utilitarian value at all, but rather aesthetic, since the motley and incredibly attractive beauty of the foliage of these plants fascinates not only lovers, but also experienced professionals. However, only experienced gardeners can take care of the flower of calathea, because it is incredibly moody and requires a lot of attention.

The main feature of kalatas is their unusual leaves, but there are other properties and distinctive features that you need to know about if you are going to take care of home calathea. In most plant species, underground shoots form a superficial root system, from which rosettes of large oval leaves grow up to 30-40 cm long, on long petioles. The calathea flower can reach a height of 70-90 cm. Calathea bloom is unattractive, the only exceptions are saffron calathea and Varshevich's calathea, in which nondescript flowers are hidden behind bright bracts of cream, white, orange and pink shades. 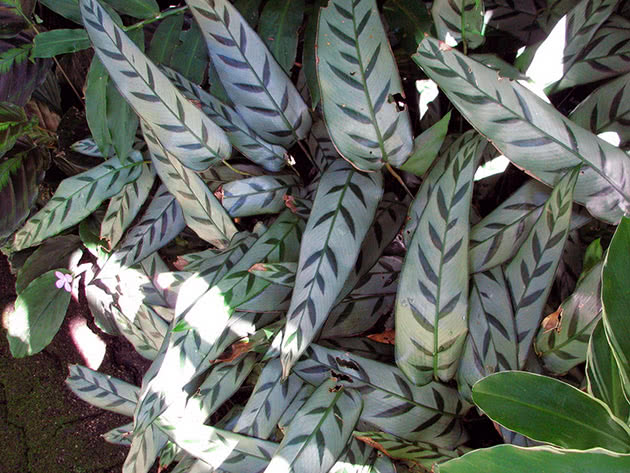 Calathea home flower is very demanding in care, but there are species more adapted to growing conditions at room conditions and less adapted. The first include Bachem calathea, as well as decorated, Makoya, striped, Vejcha (Vicha) and some others.

Calatheas have one common feature for all arrowroots: in the evenings, the leaves of the plant are folded and rise up, like palms during prayer, and in the morning the leaves fall and open. For this, the kalatea, like the arrowroot , is called the "prayer flower."

How to care for calathea

The calathea flower, like all tropical plants, is warm and photophilous, but as they say, everything needs a measure: if the leaves of the calathea turn pale and lose their decorativeness, then from the excess of light the leaves become brown, which also does not add to their appeal . Caring for calathea involves establishing a balance of all the needs of calathea and the constant observance of this fragile balance, so the best place for calathea is light partial shade, where bright sunlight does not fall. The temperature regime needs a smooth, without sudden changes, the lower limit of 16 ºC, and no drafts!

With regard to soil moisture, the most important thing in this matter is water quality. Water for irrigation should be warm (2-3 degrees warmer than indoor air) and soft, rain or melt, but if not, dip two or three handfuls of peat wrapped in gauze in a bucket of ordinary tap water in the evening, and this morning moisten the plant soil with water. Watering in the spring-summer period should be plentiful, but the excess water flowing into the pan must be drained so that the roots are not affected by rot. In winter, watering is not much reduced. The main principle of irrigation is that the soil in the calathea is always slightly moist, but not wet.

Calathea at home, like its wild relatives, needs very high humidity, which should ideally be 90%, but since this is difficult to achieve in an ordinary house, you will often need to spray calathea leaves from a fine spray bottle or with a damp sponge. But only if you grow a variety with smooth, hard leaves. Varieties with velvety leaves cannot be moistened with washing, so you will have to keep such specimens on a pallet with wet pebbles so that the bottom of the pot does not touch the water. But best of all, indoor calathea feels in glass containers (aquariums, florariums), where high humidity is constantly maintained. 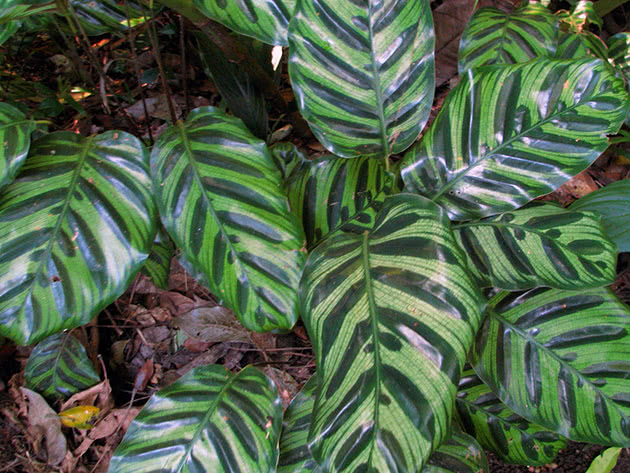 In this matter, the calathea houseplant also requires maintaining a balance: fertilizers should be enough, but in no case more than what the plant needs. Complex fertilizers for ornamental-deciduous plants are used as top dressing once every two weeks from April to August, and saffron and Varshevich calatheas are fertilized with top dressing for decorative-flowering plants.

Young calatheas require an annual transplant, adults - once every two to three years. Transplant is carried out in the spring. A pot is needed small and wide rather than deep. Soil for calathea should be slightly acidic, breathable and loose, as for other arrowroot or rhododendrons, and it is better to buy it in a specialized store. But if you want to make the soil mixture for calathea yourself, then you need to mix one part of humus, peat, leaf soil and half of calcined river sand for this.

How to transplant a calathea? First, you need to put drainage material in a thick layer, then a layer of fresh soil, on which you need to carefully, trying not to destroy the earthen lump and not damage the roots, overload the calathe, and then add so much new soil on the sides so that it fills the entire space of the pot. 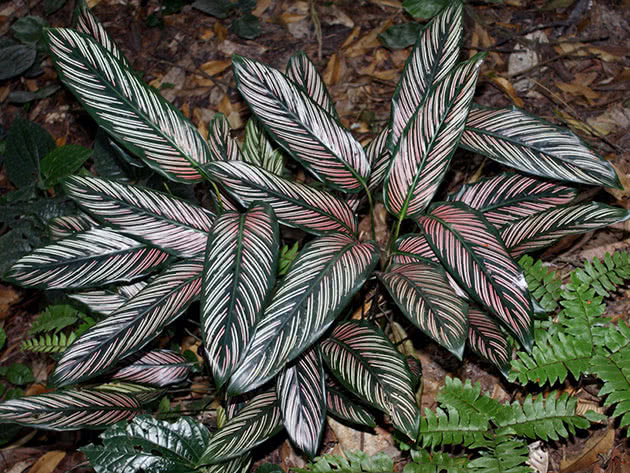 Calathea propagation by dividing the bush

During a spring transplant, a plant can divide its rhizome into parts so that each leaf has several leaves and formed roots. Delenki is planted in pots with a diameter of 7-9 cm in the soil for arrowroot and kept in partial shade, in a warm and humid place - it is best on a pallet with wet expanded clay next to the heating radiator. Calathea takes root for a long time, but it all depends on how you care for it. 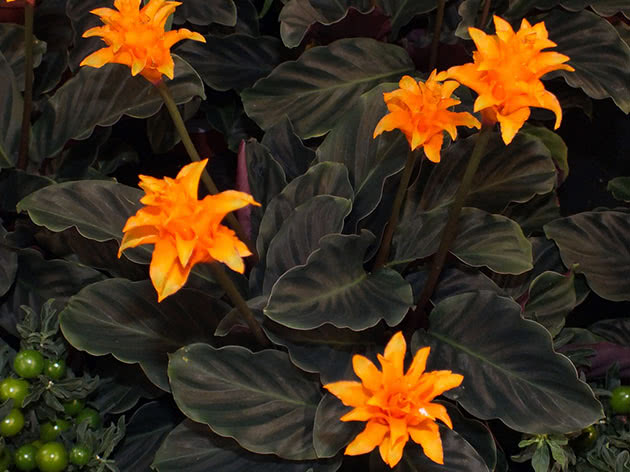 The aboveground handle is very carefully separated from the uterine plant, planted in moist soil and covered with a film or a transparent bottle, which is not removed until the handle has taken root. It should be noted that far from everyone manages to propagate the kalatea by cuttings.

This is the most difficult way, since even high-quality calathea seeds may not germinate. Sow seeds in a bowl with a mixture of leafy soil (two parts) and sand (one part) and grow at a temperature of 21-25 ºC. When a pair of leaves appears, the seedlings dive into boxes with the same soil mixture, and later, when they get stronger, they are planted in individual pots. 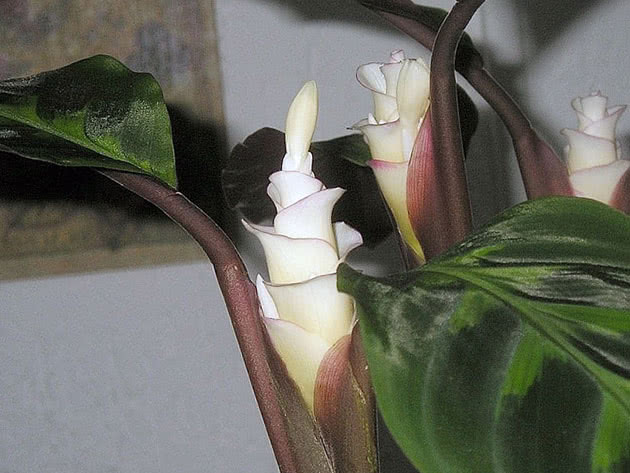 Pests and diseases of calathea

If you have not created the necessary level of air humidity for calathea, it can become a victim of spider mites, thrips or scale insects. And in that, and in another, and in the third case, calathea leaves turn yellow and fall. How to save kalatea from pest attacks? If you see a thin web, sticky coating or bright spots on the leaves, take measures: scabs and thrips are destroyed by treating the leaves with soap and water. But if this measure does not help, you will have to apply insecticide treatment, as in the case of spider mites. 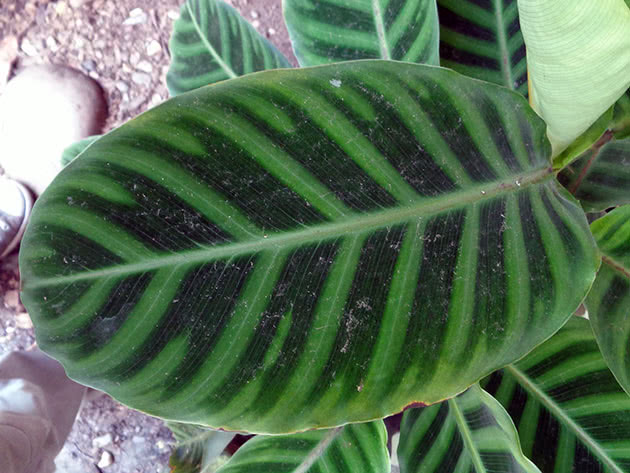 If only the ends of the leaves dry in the calathea, the reason is insufficient humidity. It is necessary to increase the spraying of the leaves and rearrange the plant on wet pebbles. If dry spots appear on the leaves, then these may be traces of sunburn caused by spraying the leaves with too large splashes, which, remaining on the leaves, turn into magnifying glasses under the sun's rays. Why does kalatea still dry? Due to insufficient watering, drafts and thrips. 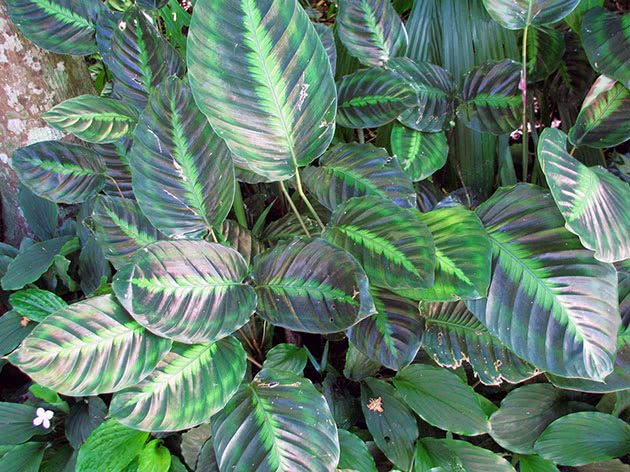 If only the lower leaves of calathea turn yellow, then this is the natural course of things: old leaves die off, new ones appear. But sometimes calathea turns yellow not only in the lower part, and there can be at least two reasons: firstly, improper watering, and secondly, an overdose of fertilizers. Inadequate watering, as well as excessive or too frequent, can provoke yellow leaves. An earthen lump between waterings should dry two centimeters in depth, otherwise, due to a poor supply of oxygen to the roots, young roots will rot and the leaves will turn yellow.

As for top dressing, even during active growth, calatheam needs only half the dose recommended by fertilizer manufacturers. Calathea leaves may turn yellow when it freezes. 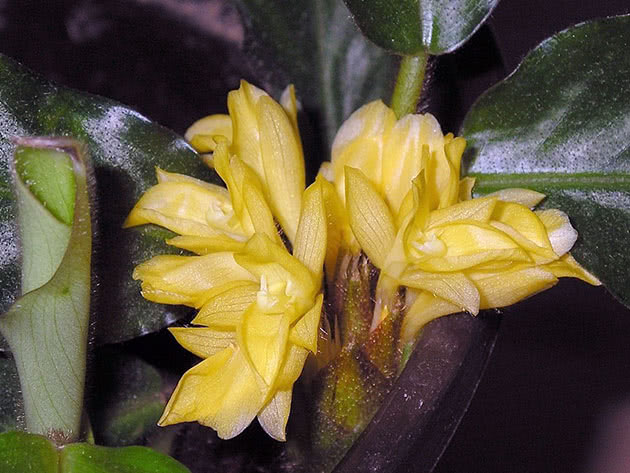 In calatheas, the leaves dry and curl from too dry or cool air in the room or from drafts. As you can see, any malaise of calathea is caused by a violation of the rules of detention, and so as not to ask later why the leaves of calathea are curled or why they turn yellow and dry, it is enough to observe the agrotechnical conditions for this plant. Calathea is capricious, but there is nothing impossible in her requirements.

Names and types of calatheas

In a culture, these varieties of calatas are grown:

One of the most unpretentious calatas comes from Brazil. She has no stems, and lanceolate leathery leaves, silver-green with a dark green pattern along the middle vein, reach a length of 40 cm. 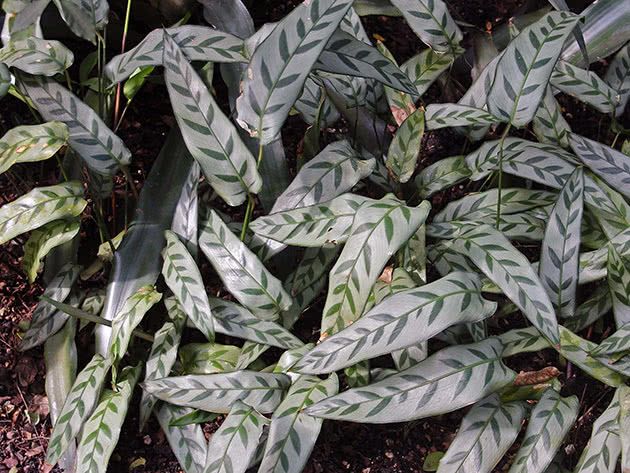 The Brazilian is also up to 50 cm high. Her leaves are broadly oval, up to 20 cm long, up to 10 cm wide, the white, almost transparent upper side of the leaf is outlined with dark green stripes, reddish spots and bright green veins. 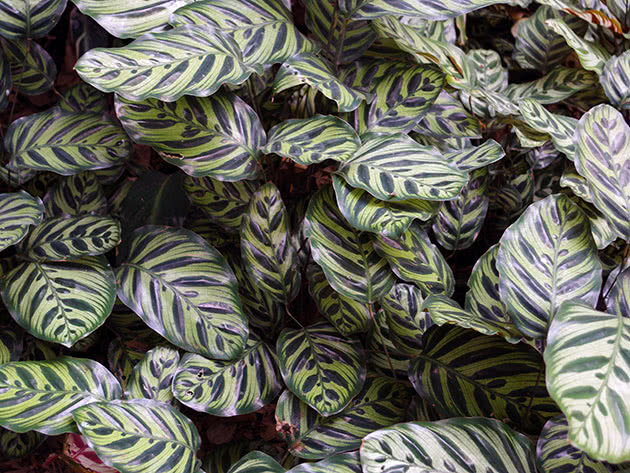 The leaves are oblong up to 20 cm in length, the central vein and strip along the edge of a light shade, the middle is dark green. 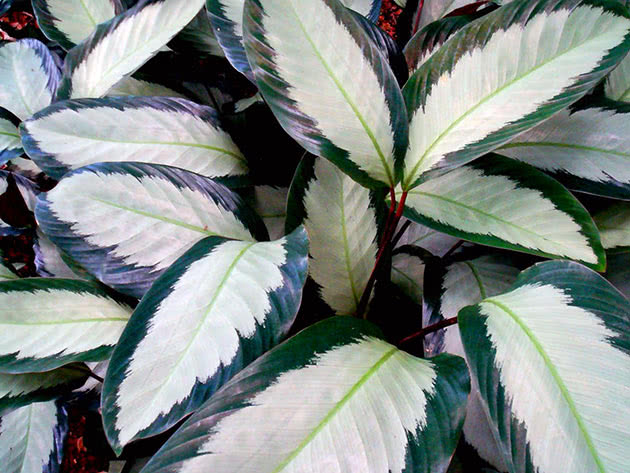 Originally from the rainforests of Colombia. This undersized plant is only up to 15 cm tall. Oval leaves up to 20 cm long and 6 cm wide on top of a yellowish-green color with silver and pink lines, the underside of the leaf is purple. It has two varieties: Calathea ornata roseolineata and Calathea sanderiana. 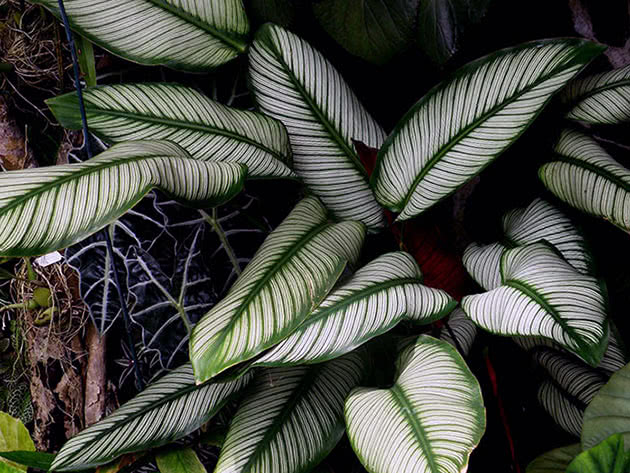 It is distinguished by dark green leaves on the upper side and almost brown below. If you ever saw this calatea bloom, you will want to see it again: beautiful bright yellow, almost orange inflorescences appear in January or February, but only if you can organize a ten-hour daylight plant. 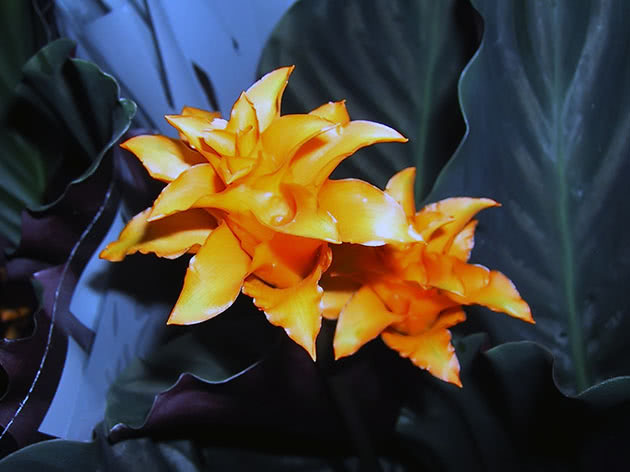 It is also interesting for its velvety dark green leaves with a light green pattern along the middle vein on the upper side and purple on the lower, and unusually beautiful inflorescences of cream, white or pink. 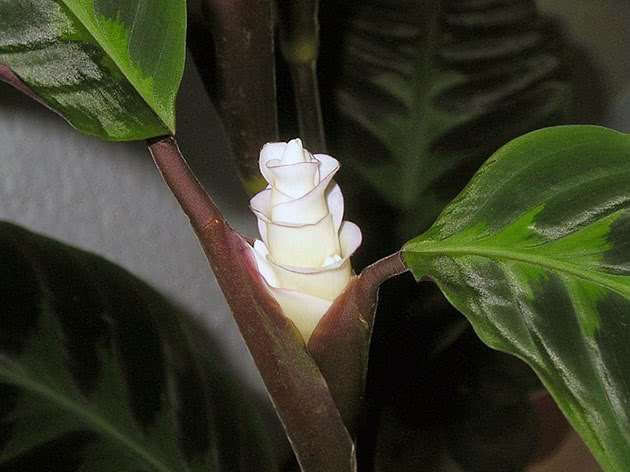 From the Brazilian tropics, it has elliptical leaves up to 40 cm long and 15 cm wide. The upper part of the leaf plate is dark green with feathery light green stripes, the lower side has a reddish tint. 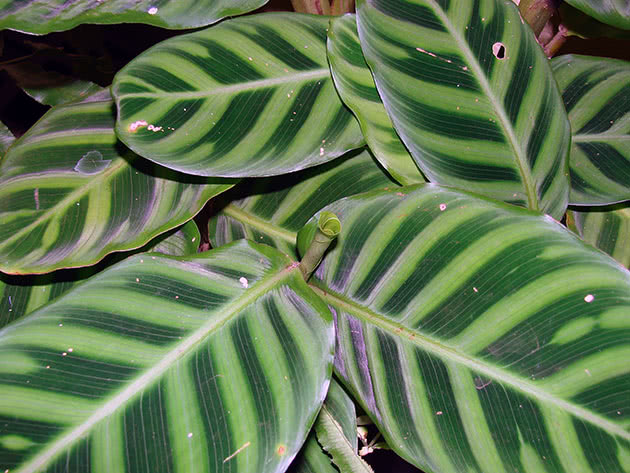 It reaches a height of 90 cm, the leaves are oval, up to 10 cm wide and 30 cm long, glossy, dark green with yellow-green stripes on the top of the sheet and with yellow stripes on the purple background from the bottom. 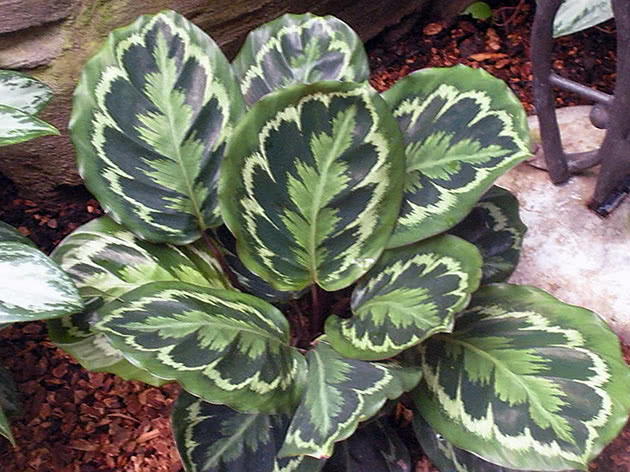 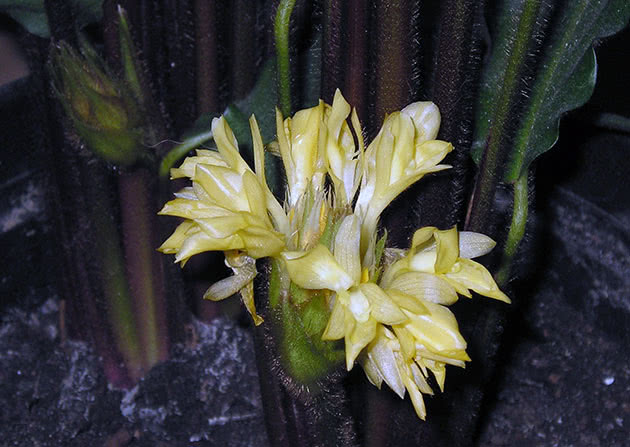 In addition to these varieties, Litze calathea, orbifolia calathea, Queen Maui calathea, Lubbers calathea, calathea medallion or roseopicta, wonderful or lanceolate calathea and other species and their varieties are also grown at home.

Many argue that calathea, as a symbol of family happiness, brings peace and comfort to the house. Astrologers say that it is connected with Mars and the Sun, therefore, it absorbs aggression and sets in a peaceful manner. Try to grow a calathea in your house and thereby confirm or deny the justice of the signs associated with this plant. But in any case, the aesthetic pleasure of calathea you get guaranteed.