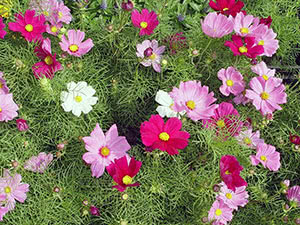 Cosmea is a flower familiar to us from childhood. Just when we saw cosmea bushes near the entrance, in parks, squares and wastelands, we did not know what this plant is called.
Due to its undemanding conditions and care, as well as its resistance to adverse environmental factors, Mexican aster has spread around the world.

Read our article and you will find out:

Planting and caring for cosmea

Read more about growing cosmeas below

Cosmea flowers (Latin Cosmos) , or cosmos , or the Mexican aster belong to the genus of perennial and annual herbs of the Astrovian family, or Compositae, with more than twenty species. The name comes from the Greek word kosmeo and in translation means "decoration". The tropics and subtropics of America are considered to be the birthplace of cosmea; most of the species of cosmea grow in Mexico. In our climate, only three species of this genus are grown - two annual cosmeas and one perennial.

The cosmea plant reaches a height of 50 to 150 cm. Its stems are thin, flexible, upright and branched. Leaves are opposite, double-cut, openwork, elegant. Inflorescences-baskets, similar to daisies up to 12 cm in diameter, grow solitary or collected in loose corymbose panicles. The middle flowers in the baskets are small, tubular, yellowish, and reed - large, purple, pink, red, white, golden yellow.

Often you can read or hear the expression “terry cosmea flower” or “terry cosmea cultivation”, but this does not mean that it is a separate species, just in recent years, breeders have bred terry varieties of plant species long grown in the culture. Cosmea fruit - achene of dark yellow, gray or brown color. Cosmea seeds retain their germination for two to three years.

Cosmea flower is propagated by seeds, both by sowing directly into the open ground, and by seedling. When to plant cosmea seeds in open ground? A kosmei flowerbed is sown in early spring, after the snow has melted. Seeds are scattered on the ground surface with nests, three to four pieces every 30-40 cm and slightly slap them with the palm of your hand so that the depth of planting is not more than one centimeter.

Cosmea flowering during seedling-free sowing begins in July and early August. You can sow cosmea in open ground in late autumn, before winter. In addition, kosmey perfectly reproduces by self-sowing in the fall, you only need to thin out the densely ascended shoots in the spring. 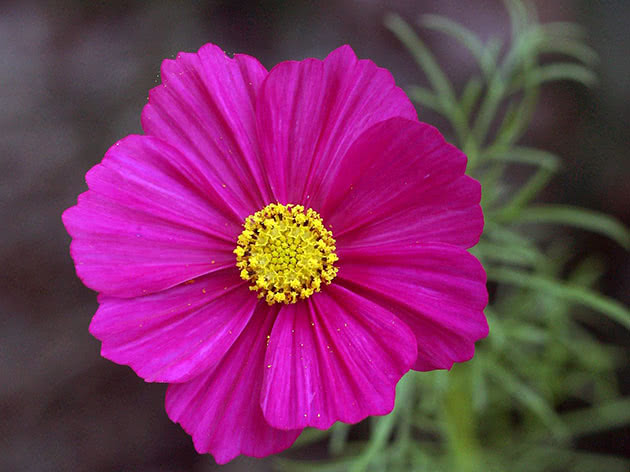 Cultivation of cosmei in seedling gives more reliable and faster results. When to sow cosmea for seedlings? In March or April. The photosensitive cosmea seeds sown on top of the substrate are slightly pressed into the ground without sprinkling, moisturize and cover the inoculation with film or glass. The sowing container is kept in a bright place. If the temperature for seed germination is in the range of 18-20 ºC, sprouts will appear in a week or two.

Thick seedlings need to be thinned out so that the distance between the seedlings is 10-15 cm, for this purpose you can pick. Spiked seedlings are grown at a lower temperature of 16-18 ºC. If you do not want to bother with picking seedlings, you can immediately sow two or three seeds in separate cups.

Cosmei planting is carried out in early June, when return frosts have passed and seedlings are stretched to 6 cm. Landing in mid-May is permissible if you are sure that the cold will not return. Find for cosmea an open, sunny area, protected from the wind, with moderately fertile, well-drained, slightly acidic soil. Too fertile soil contributes to the lush growth of greenery, but, alas, the quality and intensity of flowering suffers from this. 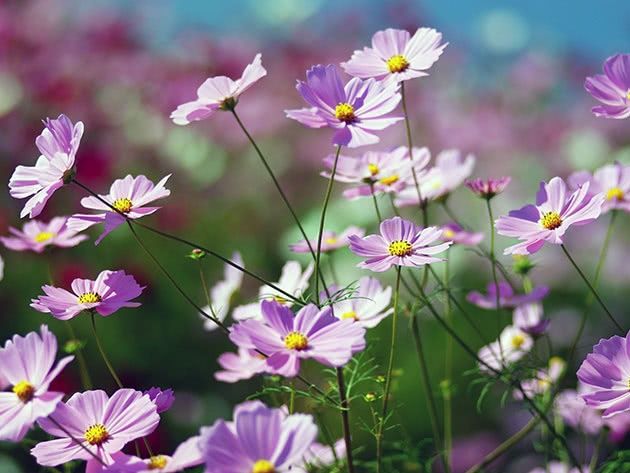 How to plant a cosmea

So, in mid-May or early June, when the heat finally comes, prepare shallow holes in the garden according to the 30x30 or 35x35 scheme, if you are going to plant tall varieties, and pour them with water. Then plant the seedlings in the holes, tack it and water again. Do not forget that tall varieties of cosmea may need support, therefore, in advance, when planting seedlings, dig in the slats or rods around which you will tie an adult bush. When the cosmea reaches a height of 50 cm, pinch the tops of the shoots so that the plant shrubs better. Seedlings grown in seedlings in June or mid-July blooms.

Planting and caring for cosmeas are burdensome even for beginners in floriculture. Watering the cosmea is carried out once a week, and it should be plentiful - four to five buckets of water should be poured under each bush. After watering, loosen the soil in the area and remove weeds until the cosmea becomes an adult, strong plant.

Cosmea is fertilized with fertilizers for flowering plants three times per season: before budding, during it and at the beginning of flowering. For more abundant flowering, foliar top dressing can be done - spraying on the leaves with the Bud preparation, but when fertilizing cosmea, remember that moderation is needed in everything. Remove fading flowers in time.

If the cosmea on the flowerbed has grown greatly, it can be cut, this will not stop flowering, and the bushes will become more compact and more attractive. That, in fact, is all you need to know about growing cosmea flowers. 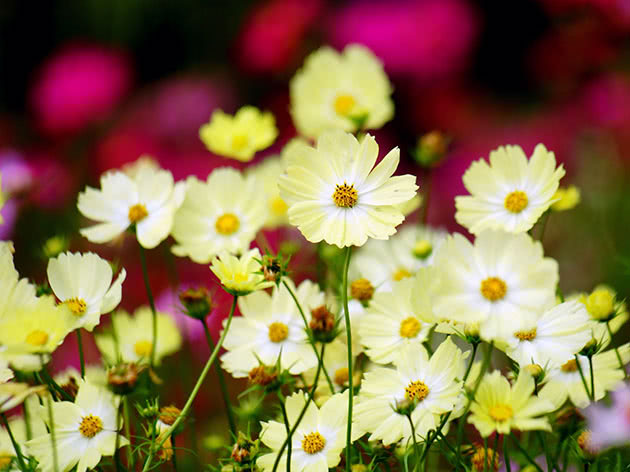 Cosmea is so immune to diseases and pests that it is practically not affected by them. The threat is only slugs and snails, and then, until the plant has come into force. You will have to fight with mollusks by collecting them manually. Arrange the beer cups in the area and collect from time to time the gastropods who crawled to feast on them. 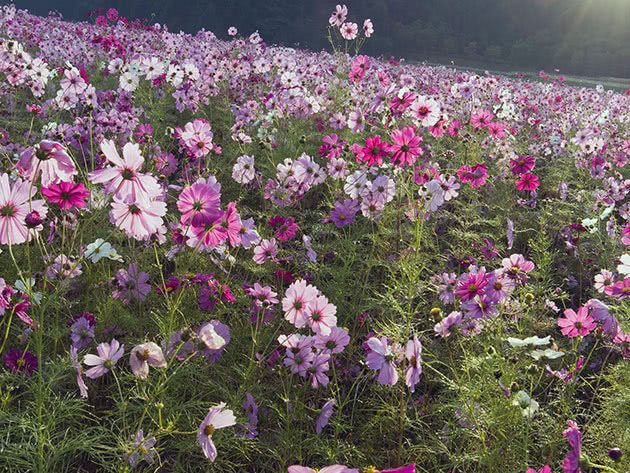 How and when are cosmea seeds harvested

Perennial cosmea propagated by tubers and cuttings, and the annual cosmea in the garden after the initial planting will propagate by self-sowing for several years - from three to five. If you want to get cosmea seeds, leave the largest buds on the bush to ripen the fruit, and so that the ripened seeds do not wake up on the ground, put gauze bags on the flower heads. Once the seeds have darkened, it's time to take them off. However, you should know that the cosmea plant is cross-pollinated, so the seeds do not retain varietal traits, and it makes sense to just buy seed from well-established manufacturing companies. 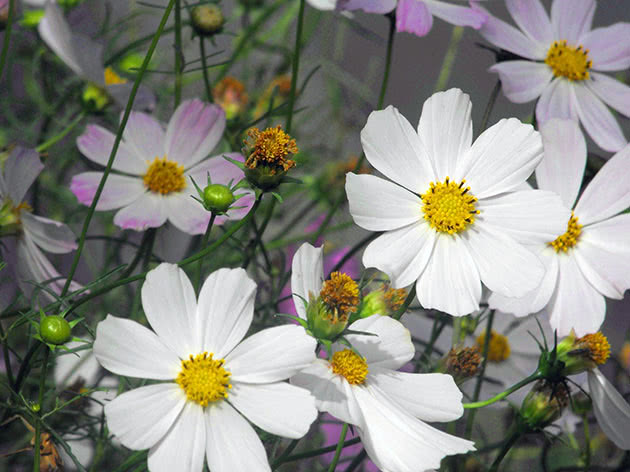 When the perennial cosmea fades, it is better to cut it off, leaving only 15 cm of stems on the bush. For winter, cosmea is covered with spruce branches.

Types and varieties of cosmea

In culture, three types of cosmea are grown - two annuals and one perennial. True, these species, thanks to breeders, have many varieties and hybrids. So, we present you the annual types of cosmea:

An annual herbaceous plant from the mountainous regions of Mexico with erect densely branched stems with a height of 80 to 150 cm. As the name implies, the foliage of this species is dissected into filamentous lobes, so it looks like dill leaves. Baskets from 7 to 10 cm in diameter grow solitary or collected in large corymbose inflorescences. The color of the marginal flowers is white, red, pink, purple, and tubular flowers form a small yellow disk in the middle of the basket. Cosmea twice-feathery blooms profusely and gives a good self-sowing. In culture since 1799 and today is the most popular species in floriculture. Varieties: 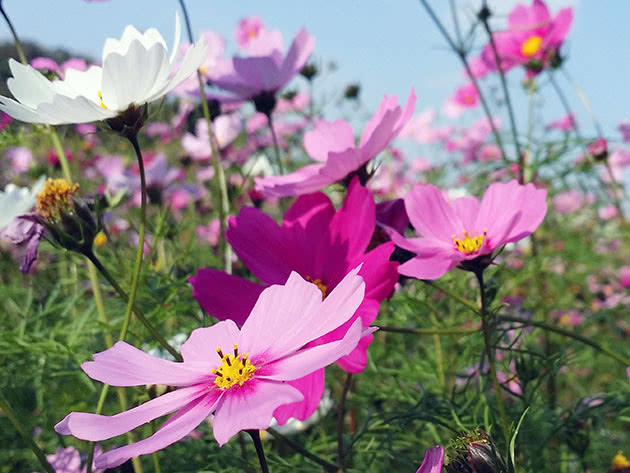 Distributed in Latin America, it is a very thermophilic species with branched erect pubescent stems up to one and a half meters high. The leaves are twice and thrice dissected into wide cirrus lanceolate lobes, pointed to the tops. Reed flowers are orange or golden yellow, tubular - yellow with protruding dark anthers with orange ends. In culture since 1799. Varieties: 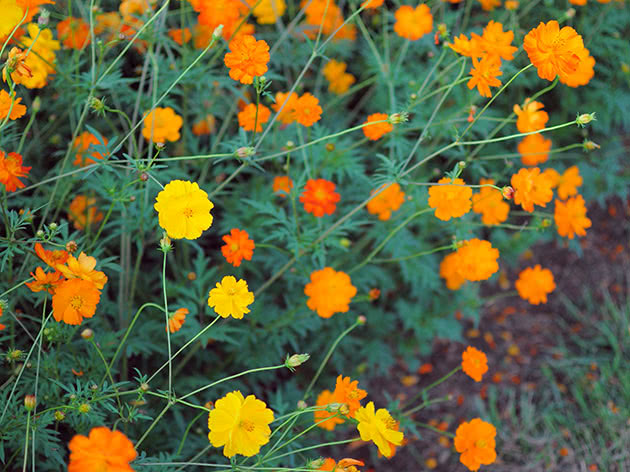 Perennial cosmea is represented by such a species as a blood-red cosmea brought to us from the same Mexico. Sometimes this species is called black cosmea, since its red color is very dark, and velvety flowers smell like chocolate. The leaves of this species are complex, consisting of an unpaired number of leaves. Since cosmea is a red plant extremely heat-loving, it is recommended to grow it in pots, which can be brought into the house for the winter. If you decide to grow blood-red cosmea in the open ground, you will have to cover it for the winter. 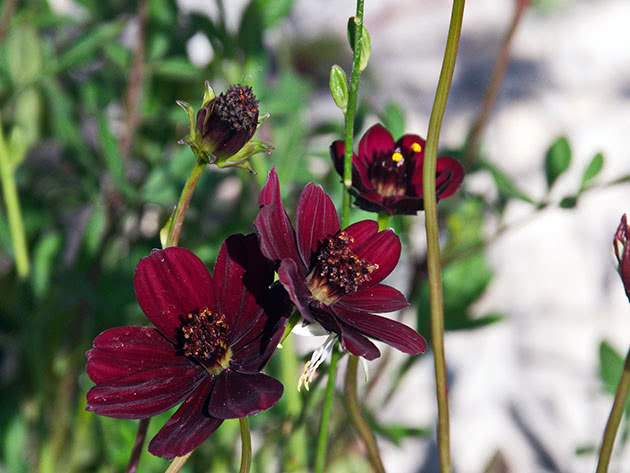 Recently, terry cosmea is gaining more and more popularity. Most often, gardeners are interested in such varieties: