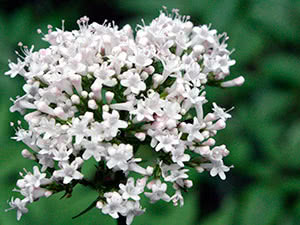 Valerian (lat. Valeriana officinalis), or medicinal valerian, or cat grass - a species of the genus Valerian Honeysuckle. The birthplace of the plant is the Mediterranean. It is distributed in subtropical and temperate zones. Valerian grows among thickets of shrubs, in swampy and lowland meadows, swamps, clearings and edges. Valerian medicinal and its healing properties have long been known: Avicenna, Pliny and Dioscorides believed that this plant is able to strengthen and soothe the brain and control human thoughts. In the Middle Ages, valerian was used as an aromatic and soothing agent. The plant got into the pharmacopeia of European countries only in the XVIII century, then the industrial cultivation of Valerian officinalis began. There are different opinions about the origin of the name of this plant. Some, for example, argue that Valerian was named after the Roman emperor, while others - that in honor of the doctor Pliny Valerian. Translated from Latin, "valerian" means "to be healthy."

Planting and caring for Valerian

Read more about growing valerian below

Valerian is a herbaceous perennial that reaches a height of 120 to 180 cm. The rhizome of Valerian is thick and short, with a loose core, sometimes hollow with transverse partitions. Stolons and thin subordinate roots up to 12 cm long, smooth and brittle, leave the rhizome. Valerian rhizomes have a strong aroma. 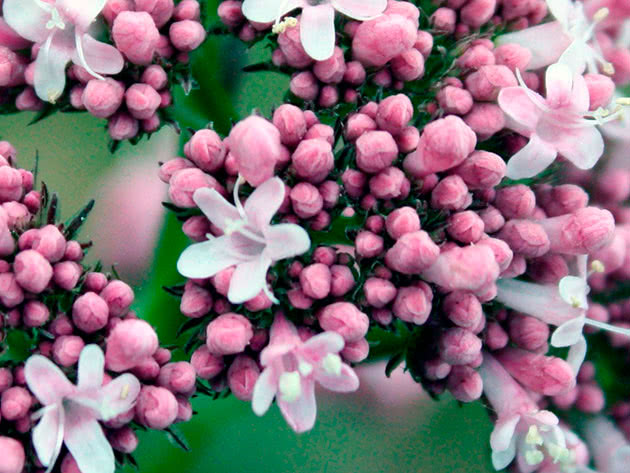 The stem of the plant is arched, erect, furrowed and branching in the upper part. The middle and lower leaves are long-leaved, the upper ones are sessile, cirrus dissected, opposite, alternate or collected 3-4 pieces per whorls. White, small fragrant bisexual flowers up to 4 mm in diameter are collected in large axillary and apical shields or panicles. From the second year of life, the flowering of Valerian officinalis lasts almost all summer. Fruits - ripening achenes at the end of summer or at the beginning of autumn.

Valerian grows well both in the sun and in partial shade, and even in the shade. Sowing seeds is best done in early spring, but then you need to prepare the site for valerian from autumn: dig with compost (humus) and full mineral fertilizer to a depth of 25-30 cm, and in spring, as soon as the topsoil dries, the surface is only harrowed with a rake. However, valerian seeds lose their germination very quickly, so experienced gardeners prefer to sow in the summer, immediately after collecting the seeds, after digging the soil with organic matter at the rate of 5-7 kg of humus or compost for each m² of area.

Valerian seeds are sown in small furrows without seeding, and sprinkled on top with a layer of humus with sand or sifted peat 1 cm thick. The row spacing is 8-10 cm. Until seedlings appear, the soil on the site should be slightly moist all the time.

For those who already have valerian, it is more convenient to propagate it by stolons: in autumn, in October, valerian bushes are dug up, cut tops on them, and stolons are separated from the rhizome - underground shoots, which are planting material. From one bush you can get from 5 to 8 stolons with buds ready for propagation. Valerian rhizome is useful for medicinal needs, and stolons are immediately planted in a prepared bed at a distance of 15-20 cm from each other. After planting, the plot is watered. The survival rate of valerian stolons is very high.

At first, the crops are watered carefully, through a strainer, so as not to wash the seeds from the soil. After emergence, watering is less common. In the developmental stage, the seedlings of two true leaves are thinned out in increments of 3-4 cm, after which the seedlings are fed with a solution of bird droppings (1:12), and the second feeding is carried out when five leaves develop in valerian. 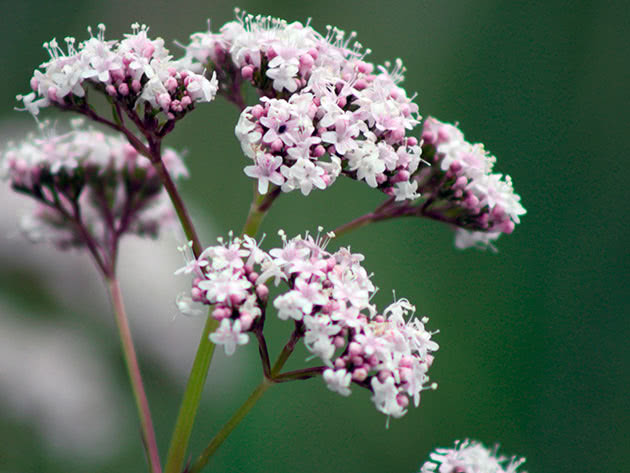 Valerian, sown in the spring, may already give the first crop in the fall. Every second plant is dug up, and the remaining ones are fed Nitroammofoskoy for the winter at the rate of 50 g of fertilizer for every m² of plot. In winter, the bed with valerian is covered with small branches, and a layer of dry stems or straw 5-6 cm thick is spread on top of them. If a thaw begins in the middle of winter, make small windows in the straw so that the valerian does not spill.

In the second year of life, valerian will bloom, but as soon as the seeds begin to ripen, peduncles need to be cut, and valerian should be fed with a solution of bird droppings. If you need seed, keep the cut flower stalks of valerian under a canopy until the seeds fully ripen. In the fall, rhizomes of valerian are dug up.

Valerian collection and storage at home

How to collect valerian

Rhizomes are harvested in October, when the stems of the plant turn brown and dry. Only the correct preparation of valerian fully preserves its healing properties. The roots need to be dug up, cleaned of the earth, freed from the remains of ground organs, rinsed quickly, but thoroughly under a stream of cold water and dried in fresh air for two days.

How to Dry Valerian

Then the valerian roots are laid in a warm room on a wire mesh and dried for two weeks, turning over from time to time. You can dry the rhizomes in a dryer or oven at a temperature of 35-40 ºC - so you will save a lot of time. During drying, the rhizomes acquire a brown color and a strong characteristic aroma. After drying one kilogram of fresh roots, about 200 g of dry roots are obtained.

Tightly-closed containers are used to store finished raw materials, otherwise the essential oil will volatilize. The shelf life of valerian root is 3 years.

Valerian officinalis is the most popular, but far from the only species of the genus. However, the remaining species of valerian introduced into the culture are grown as ornamental plants. The most attractive of them are:

= (Valeriana turczaninovii = Valeriana heterophylla = Valeriana reverdattoana) - a plant native to Northern Mongolia and Siberia with an elongated rhizome and straight bare or almost bare stems. The basal leaves of the Altai valerian are whole or with two lateral segments, and the stem ones are lyre-pinnate-dissected. Inflorescence capitate, sometimes with additional small heads. The flowers are narrow-funnel-shaped, light pink. The fruits are naked, purple.

from the same places as Valerian Altai. She has a shortened rhizome with cord-shaped lobes and stolons with a bunch of leaves at the ends, ascending or curved stems 5 to 20 cm long, one third of which are covered with vaginal leaves. The lower long-leaf leaves are folded into a raised rosette, and the sessile leaves of the upper pair can be whole or with two to three pairs of small side segments. A dense racemose, almost capitate inflorescence of pink flowers during fruiting grows and becomes loose.

- a plant from the eastern regions of the Alps. It has rounded ovoid leaves collected in a basal rosette. This species forms light green cushions 2 to 7 cm high. Valerian blooms with small pink flowers collected in dense inflorescences up to 3 cm in diameter. This species is used as a groundcover in rock gardens. Valerian lying forms many underground stolons and is able to capture large areas.

found at an altitude of 1800 to 2500 m above sea level in the mountains of the Caucasus and Turkey. This is a perennial with a height of not more than 15 cm, forming small bushes. The few stem leaves of this species are narrow, basal - oval-oblong, sometimes pointed, up to 2 cm long. Pink flowers form a compact racemose.

In addition to those described, such types of valerian as capitate, mountain, lipolist and three-winged are found in culture, however, they do not possess high decorative qualities.

What is the use of valerian ? First of all, in the substances that make up its roots. The roots contain essential oil, butyric, formic, malic and acetic acids, terpenoids, the alkaloid actinidin, valerid glycoside, tarry and tannins, sugars, free isovaleric acid, saponins, vitamins, macro- and microelements, for example, iron and selenium. The combination of all these substances necessary for the human body determines the healing properties of valerian , but the most valuable component is essential oil.

One of the main areas of application of Valerian drug preparations is nervous disorders, for example, epileptic and hysterical seizures, muscle cramps, insomnia, neurasthenia, migraines and other mental disorders of a chronic nature. Valerian root has a calming effect and weakens the excitability of the nervous system. As a sedative, it is also used for spasms of the gastrointestinal tract, hepatic and renal colic, thyroid diseases, hyperthyroidism, neurodermatitis and hypertension. 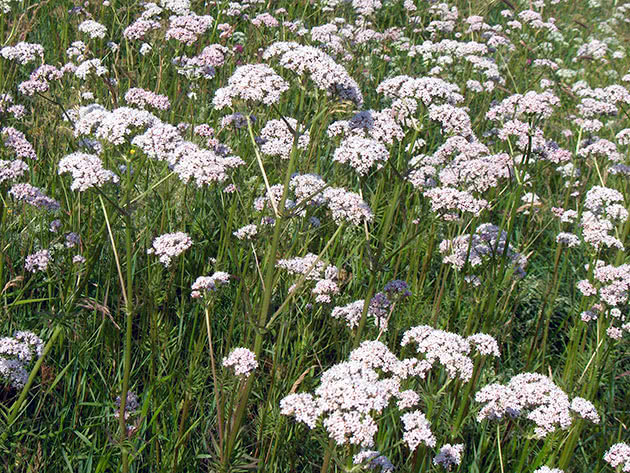 Valerian dilates blood vessels, lowers blood pressure, relieves spasms of venous vessels. In countries such as Germany and England, Valerian is the official sleeping pill. For the same purpose, it is consumed by almost half of US residents suffering from sleep disorders.

Valerian stimulates bile secretion, the secretory function of the gastrointestinal tract, and regulates the cardiovascular system. Valerian is also effective for weight loss: it reduces appetite, dulls hunger and soothes. With the complex therapy of obesity, it is practiced to replace a full meal with a glass of valerian infusion.

Valerian is also used in cosmetology: it eliminates rashes, redness, increased sensitivity of the skin and improves complexion.

In the pharmacy you can buy preparations of Valerian Phytosedan, "Dried rhizomes of Valerian with roots", sedative collection No. 2 and gastric collection No. 3. At home, the preparation of valerian is also possible. How to cook valerian in the form of a decoction? 1-2 teaspoons of crushed raw material is poured into a glass of water, boiled for no longer than one minute, removed from heat, covered, insisted for half an hour and filtered. Accepted with a rapid heartbeat, vegetoneurosis, insomnia and vomiting, 1 tablespoon 3-4 times a day after meals.

A contraindication to taking valerian preparations may be increased sensitivity to them. Their reception in chronic enterocolitis and hypertension is prohibited. Caution should be exercised in the dosage of nursing and pregnant women, and since plant preparations increase blood coagulation, their use is undesirable for older people and those who have had a heart attack or stroke.

Of the side effects of valerian drug preparations, some depression, drowsiness, and decreased performance can be noted. With prolonged use, constipation, and sometimes allergic reactions, may appear.