The genus Lobivia (Lobivia) combines from 70 to 100 different types of cacti (according to data from various sources). At the moment, it is included in the genus Echinopsis (Echinopsis), but there are directories where the obsolete classification is located. Under natural conditions, such plants can be found only in certain places, namely, in the highlands of Peru, Bolivia and Argentina. It is interesting that these plants were named after Bolivia, but their name is an anagram.

This plant looks like a "classic" cactus. The young plant has a symmetrical stem in the shape of a ball. Over time, it becomes cylindrical in shape. The stalk of a cactus is unbranched, but over time a lot of root children are formed in it. Due to this feature, 1 cactus growing in natural conditions can form quite large pillow-shaped colonies. The ribs of these plants are of varying degrees of roundness or sharp. On small costal tubercles there are areoles, from which bundles of rather rigid spines come out. Separate single flowers have the shape of a funnel and they form in the areoles on the upper part of the stem (side). As a rule, pedicels have rather dense pubescence, but sometimes they are covered with thorns. The corolla tube is quite long (about 30 centimeters), and the opening in diameter is 15 centimeters. Flowers can be of very different colors, even multicolor is found. About 25 flowers can open at the same time on an adult cactus, and each of them can last from 1 to 3 days. 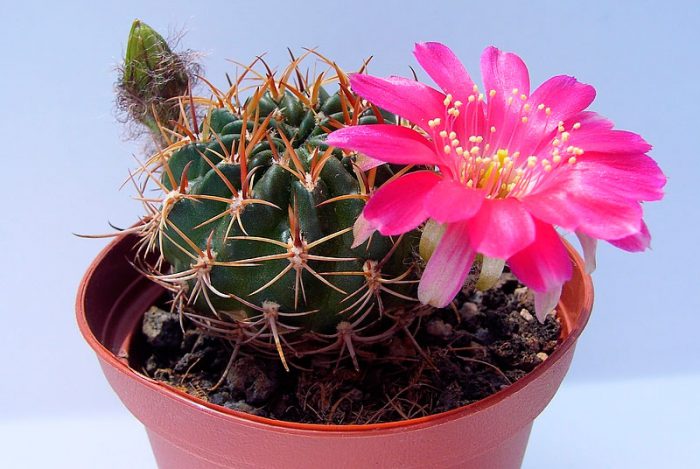 Practically, like all cacti, this plant is undemanding in care and not capricious. However, in order for it to grow and develop normally at home, you should know and follow several rules related to care.

This plant is very demanding on lighting. So, for successful flowering, a cactus needs a bright light of the sun in large quantities. It is recommended to put it near the window of the southern orientation. In the event that it is not possible to place lobivia on the south window, then it will need to provide illumination using phytolamps. So, specialists involved in the cultivation of cacti, it is recommended to use high-intensity lamps, designed for greenhouses, whose power is 100 watts. At the same time, 1 light bulb is sufficient for lighting 0.1 m 2 .

You feel normal at a temperature characteristic of central Russia. However, you should be aware that this plant needs sharp changes in day and night temperatures. In this regard, it is recommended to move it to the street, where it should be from mid-spring to mid-autumn. The place should be well protected from rain.

In winter, the cactus has a dormant period. At this time, the recommended temperature for him is 8-10 degrees. The flowering intensity depends on the cold wintering.

During intensive growth, lobivia is watered very carefully. So, it will be necessary to moisten the soil abundantly only after the soil in the pot is thoroughly dry. Overfilling is unacceptable, because it can provoke rotting of the stem and death of the plant. In the middle of the summer period, you should not water the plants for 4 weeks, and then you need to resume normal watering again. However, in the fall, each time watered less and less. In November, they again stop watering the cactus. The “dry” period lasts until spring, watering is resumed only after the formation of flower buds. It is necessary to strictly follow this watering regimen, otherwise the plant will lose buds.

A suitable ground should be neutral, loose, and allow air and water to pass through well. For planting, you can purchase a special earthen mixture for cacti, only in it you need to pour a little bit of small gravel, as well as coarse sand.

For planting, you should choose a wide and fairly low pot, since the roots of the plant are superficial, and also because it gives a lot of root processes.

It is recommended to transplant the plant in spring time and only after the overgrown cactus becomes crowded in the old pot.

It is necessary to feed during intensive growth (March-September) 2 times a month. To do this, use special fertilizers for cacti. During the dormant period (October-February), fertilizing is prohibited.

It can be propagated by seeds and root processes.

For vegetative propagation, it is necessary to carefully separate the lateral shoot from the mother plant. Then it must be left in the air for drying. After 24 hours, it is planted in a soil mixture, to which more sand should be added. When the cactus takes root, it is transplanted into a permanent pot.

Often aphids , scale insects , spider mites or mealybugs settle on the plant. If pests are found, treat the plant with a special insecticide.

Root rot may appear due to overflow. 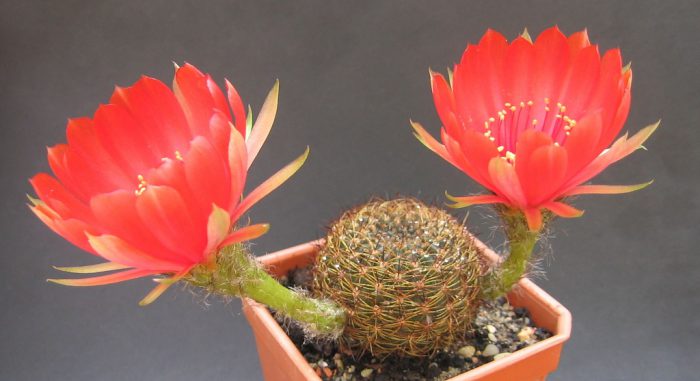 It is a compact dwarf cactus that grows up to 4 centimeters in height. The stem has smooth, blunt ribs, of which there are approximately 14 pieces. They are densely covered with spines densely pressed to the surface, which grow from tiny tubercles. The flowers have a diameter that is 2 or 3 times larger than the stem. They have a rich yellow color. There are also varieties in which red flowers have spectacular stamens with snow-white anthers. 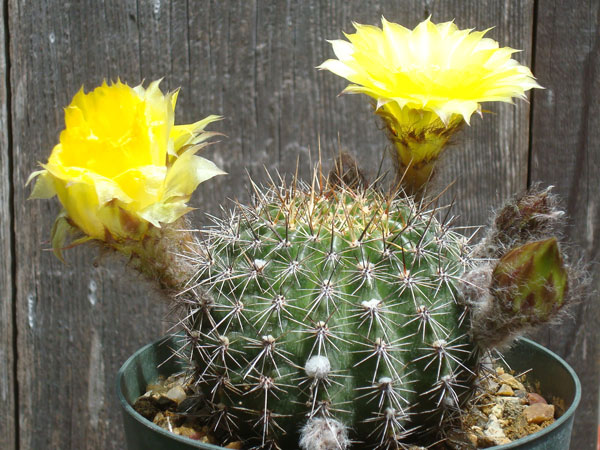 Plants of this species are quite tall. So, an adult specimen can grow up to 20-50 centimeters in height, while the stem has a diameter equal to 12 centimeters. Pronounced ribs have rather sharp edges. Each areola has 4 central rather thick spines (2-6 centimeters long), as well as 8 to 10 radial spines (approximately 1 centimeter long). Large flowers have a diameter of 10 centimeters. They are painted in yellow-lemon color, while inside the cup is a spot of saturated yellow. Thanks to breeders, varieties with pink, white and red flowers appeared. 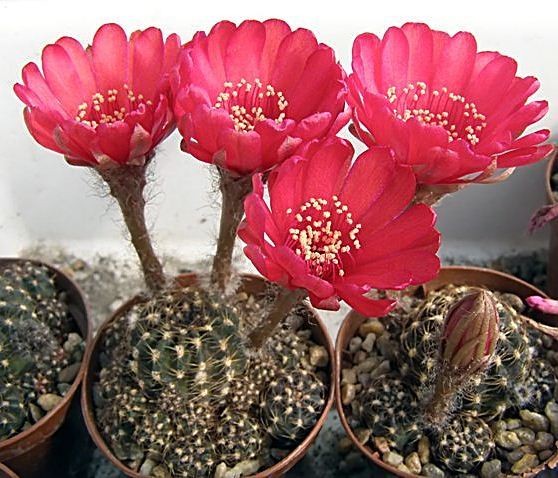 It has a height of 10 centimeters, and a diameter of 4 to 6 centimeters. It has wide and at the same time low ribs. On each of the areoles there are needle-shaped spines (from 10 to 20 pieces). In this case, the central spines are from 1 to 3 pieces and they reach 10 millimeters in length, and all the rest are thin radial lengths from 6 to 10 millimeters. The purple-red small flowers have a length of 2.5 centimeters, and their diameter is 4 centimeters. 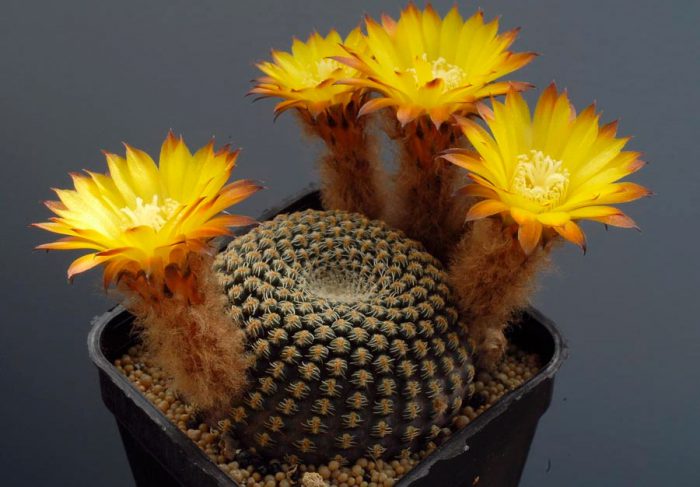 The difference between this cactus is the presence of a large number of clearly distinguishable sharp ribs. So, often on the stem they read about 24 pieces. Short, thin spines are very difficult to make out, since they are firmly pressed to the surface. Saturated yellow flowers in length reach 3 centimeters, and their diameter is 6 centimeters. 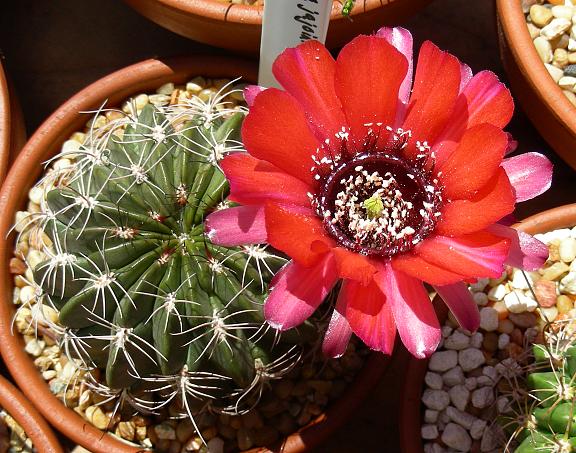 This cactus is also quite compact. The spherical shape of the stem in diameter reaches from 8 to 10 centimeters. It has a lot of squeezed ribs, on which there are clearly visible tubercles of the areola, with dark thin spines located on them (in the amount of 15 pieces). The longest central spines reach a length of 7 millimeters. This species is widespread due to its unusually beautiful and fairly large flowers that have a goblet shape. They can be painted in rich red or yellow color and at the same time they have a wide dark purple color of the pharynx, and also have spectacular stamens with snow-white anthers.