Hatiora Cactus is home to Brazil, or rather, its rainforests. According to data taken from various sources, this genus unites 5–10 species, and only part of them is cultivated at home. Some taxonomists believe that this plant is part of the genus Ripsalis. Initially, this genus was named "Chariot" in honor of the famous traveler and mathematician from England - Thomas Harriot, who is one of the first explorers of the nature of America. However, after some time, the specialists realized that a completely different plant had already been named chariote, then they had to replace the name of this flower with an anagram: chariote - a hator. 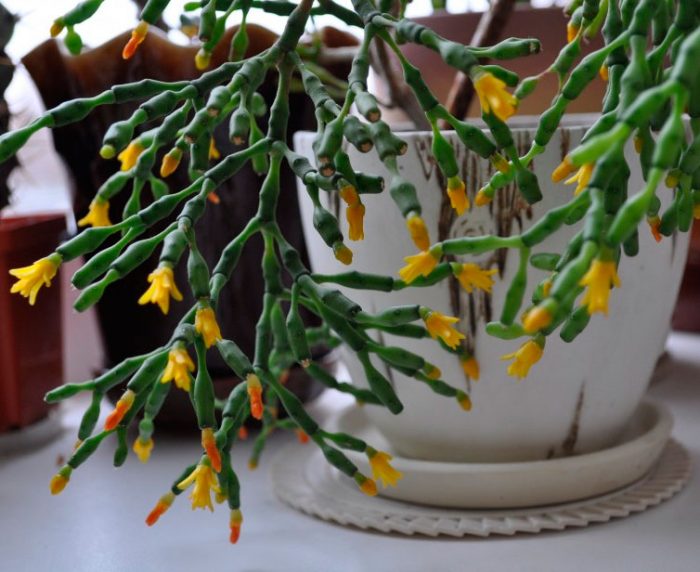 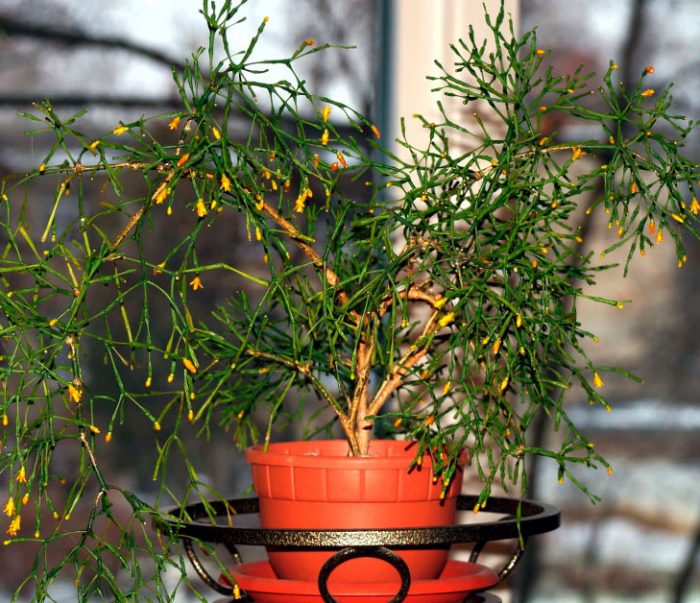 Hatiora cactus is a shrub whose shoots are articulated. The shape of the joints in various species can be cylindrical, club-shaped or flat.

What is the difference between a hator and ripsalis? In nature, the succulent plant of the hator prefers to grow on stones and in crevices of rocks, in turn, the epiphytic ripsalis can be found on tree trunks. Also, these plants can be distinguished in the direction of growth of shoots: in ripsalis, the stems are drooping, and in the hatoria grow up. In addition, the apical flowers of the hatori can be colored yellow, pink or red, while in ripsalis they grow along the entire length of the stem segment and are whitish-yellow or white. Otherwise, such flowers are very close relatives, and the conditions for growing are the same. 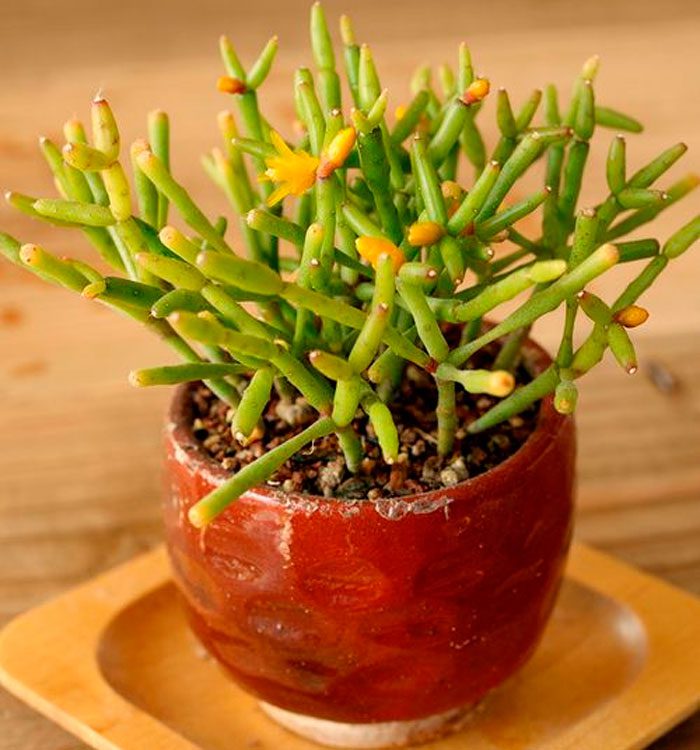 It’s pretty easy to take care of a hator at home. However, it is very important to find for her the most suitable place in the apartment. This succulent grows well on the southern windowsill, but it must be protected from direct sunlight.

In order for it to grow and develop within the normal range, it needs to ensure the differences between night and day temperatures. During the growing season, the plant feels best at a temperature of 18 to 25 degrees. In the warm season, it is recommended to transfer the flower to the terrace, balcony or to the garden, where it is placed in the lacy shade of trees.

In winter, the hatoria has a flower bud laying, but for this he needs coolness (from 12 to 14 degrees). The bush blooms in April or May. 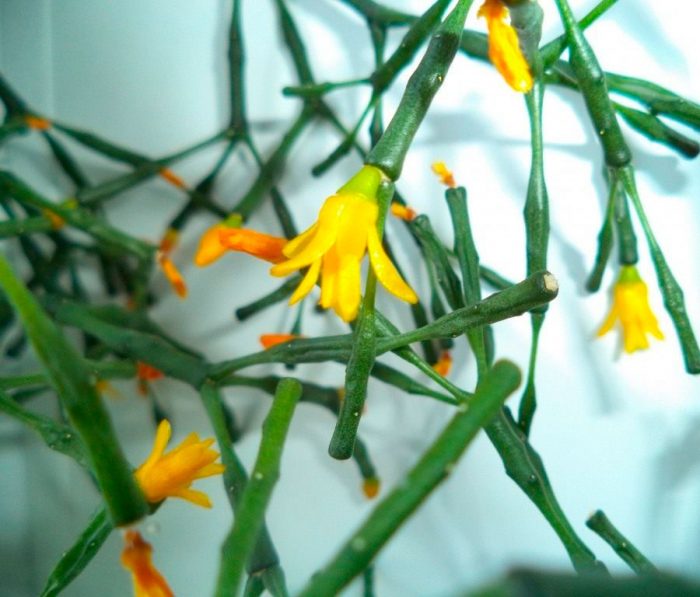 Hatiora reacts negatively to stagnant air, so the room where she grows must be ventilated systematically. On hot days, do not forget to moisten the flower from the spray bottle, in some cases this must be done twice a day. If the room has excessively low humidity, then because of this the shoots at the bush become shriveled and lose turgor.

To make the plant look neat and beautiful, it needs to be cut every spring. To do this, gently “unscrew” all unnecessary segments from the shoots with their fingers. 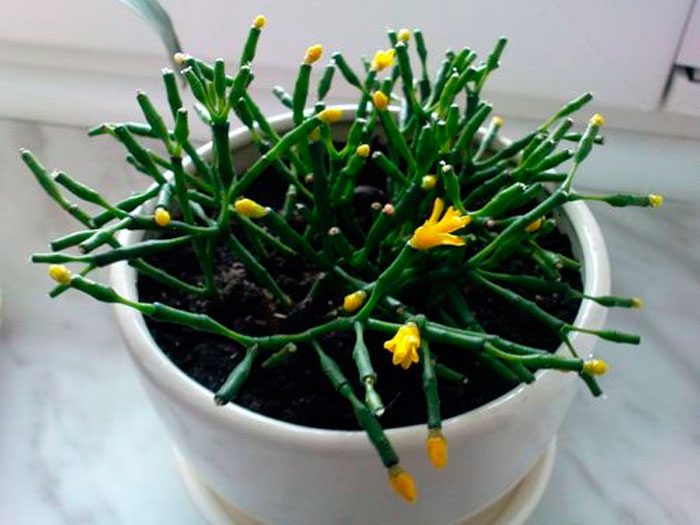 Watering is carried out immediately after the surface of the soil mixture in a container with a flower dries. To do this, use well-settled or passed through a filter water, the temperature of which is close to room temperature. During the dormant period, rarer watering is carried out (approximately 1 time in 20 days). When the plant is watered and half an hour has passed, empty the sump from excess water. If stagnation of moisture is observed in the substrate or cold water is taken for irrigation, the likelihood of developing root rot increases.

Hatior is fed during the growing season, as well as during flowering. For this, a mineral fertilizer is suitable, in which there is absolutely no calcium and a little nitrogen. Trace minerals should be in the following ratio: phosphorus - 18, nitrogen - 9, potassium - 24. They feed the flower 1 time in 2 weeks. During the dormant period, there is no need to feed the plant. 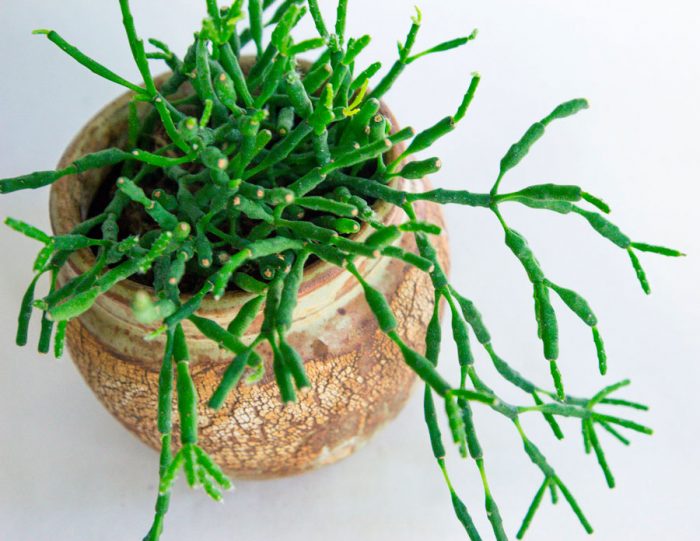 A young bush should be replanted systematically once a year, more mature specimens - once every 2 years, and large bushes - once every 5 years. Transplantation is carried out in the spring, when flowering ends. For this procedure, take the soil mixture, which includes coarse sand, peat, leaf and soddy soil (1: 1: 2: 1). A small amount of charcoal is added to the finished substrate. It should also be noted that the soil mixture should be slightly acidic or neutral. To transplant such a succulent, a low pot is used, at the bottom of which a drainage layer is necessarily made. Fill it with a thin layer of soil mixture and transfer the bush from the old container into it. All the voids in the pot must be filled with fresh soil mixture, then slightly compact its surface and water the plant. 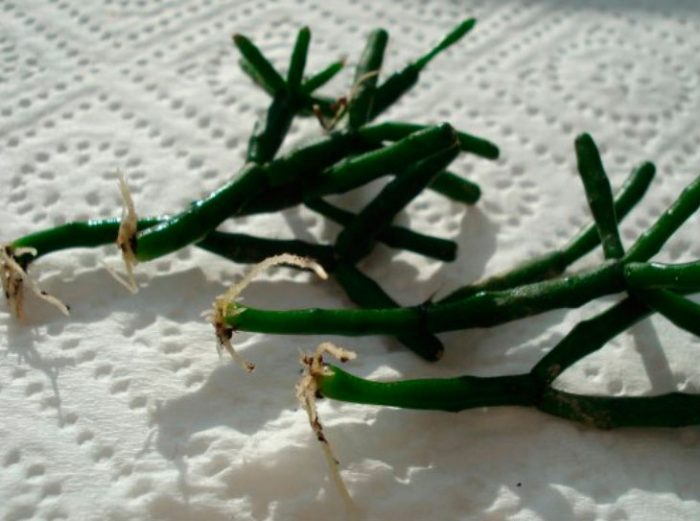 A room hator can be propagated very easily and quickly by cuttings. Any segment that has broken off from the stem can be used as a stalk, and it can give roots right there in the pot next to the parent bush. In order to propagate the flower in this way when it fades, 3 or 4 segments are carefully unscrewed from the shoot. The resulting cuttings must be treated with crushed charcoal and let it dry in the open air for 3-5 days. Then, the lower part of the segment is sprinkled with Kornevin and planted for rooting in a moistened soil mixture. Watering the cuttings is carried out only when the soil mixture is completely dry, while moisturizing it through a tray (lower watering). If the young plant is properly looked after, then the next year it will bloom.

For grafting, haior use prickly peresium. Perform this procedure in the summer. Trim the branched part of the stock, and then split its trunk. The shack of a haator used as a scion should have 2 or 3 joints. Its lower part should be sharpened with a wedge, after which it is installed in the rootstock splitting of the rootstock, fix the place of vaccination with a patch. The bandage can be removed only when the scion begins to grow. If the air temperature is 18–20 degrees where the bush will be located, then the graft can take root after 15–20 days. Those stems that grow below the place of vaccination should be cut off. Such bushes, propagated by grafting, bloom very plentifully. 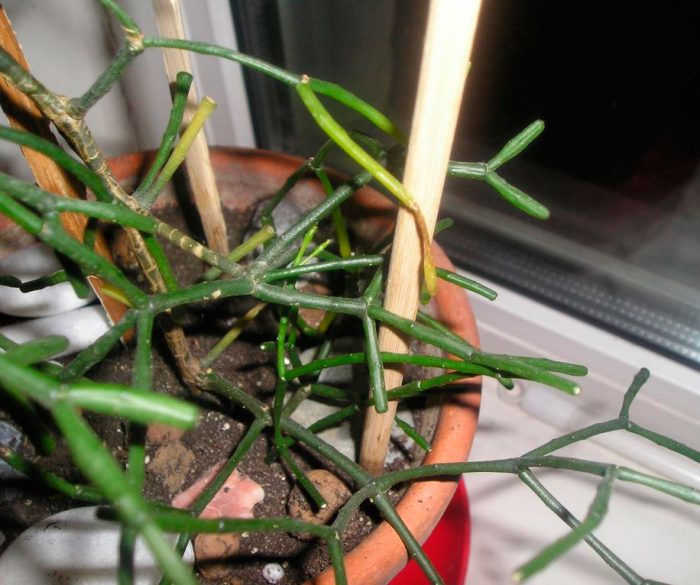 Pests such as scale insects, mealybugs and spider mites can settle on the hator. All such pests are sucking, that is, they bite through foliage or shoots and suck out vegetable juice from them. To get rid of such pests, the bush will need to be sprayed 3 times with a solution of an acaricidal preparation, for example, Acarina, Fitoverma or Agravertina. However, before spraying in a container with a flower, the top layer of the soil mixture is replaced with a fresh one.

If fluid stagnates regularly in a container, this can cause rot to form. As a result, the stem becomes soft and turns brown. If you notice signs of rot, then you will have to get rid of the bush, since it is impossible to save it. However, if you wish, you can root the unaffected part of the shoot.

Also, this plant is susceptible to late blight. At the affected bush, the shoots become discolored, turn gray, fade and rot. To save the bush, it must be sprayed with Oxychome, but treatment should be carried out in a timely manner.

Why does not the hatiora bloom 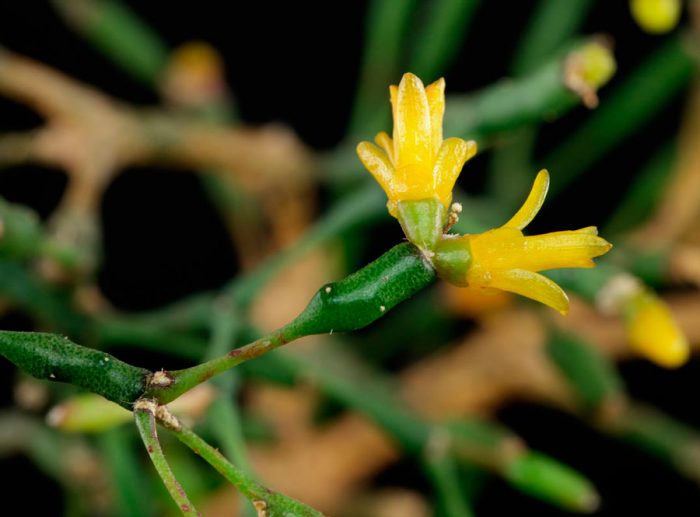 Sometimes a plant either does not bloom at all, or blooms very sparingly. This can happen for various reasons, or rather, there are two of them: an overly tight pot or during the rest period the bush was not properly looked after, and flower buds did not occur. Remember that in winter the bush should be at a temperature of 10 to 16 degrees, and it can not be fertilized, and watering is reduced to scarce.

Shoots turn yellow if pests have settled on the plant or watered too abundantly. Once the cause of this problem is found, try to fix it as soon as possible, then you will have a chance to save the hator.

Types of haators with photos and names

At home, of all types of habiori most often you can meet those described below. 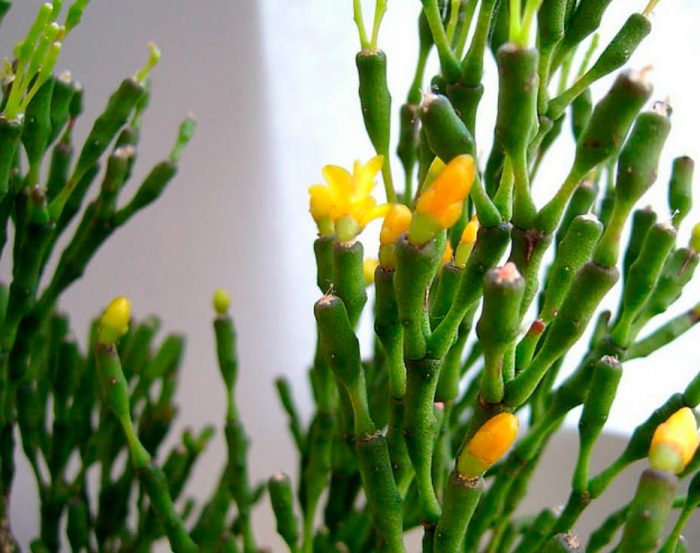 Or the hator's salicorniform, or salt-like, or solyanka-shaped. This is a typical species of the genus. Such a highly branched plant looks like a small tree with a height of about 0.4 m. This species differs from others in that its shoots are thin round in cross section, and their composition includes segments of a pin-shaped form (for this the English call this haator “The drunkard’s dream”). In spring, small apical flowers of red, pink or yellow color appear on the bush. Their shape is bell-shaped. 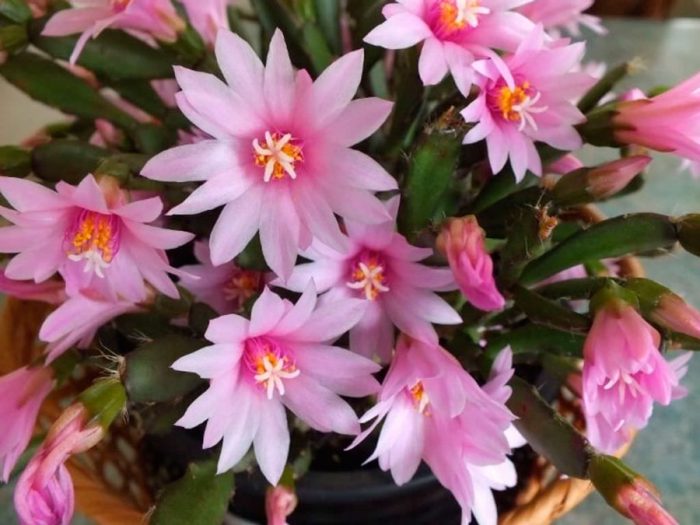 In contrast to the saltwater hatchery, this species has flat, reddish-green shoots that are club-shaped or elliptical in shape. Pinkish large flowers in diameter reach from 30 to 40 mm. 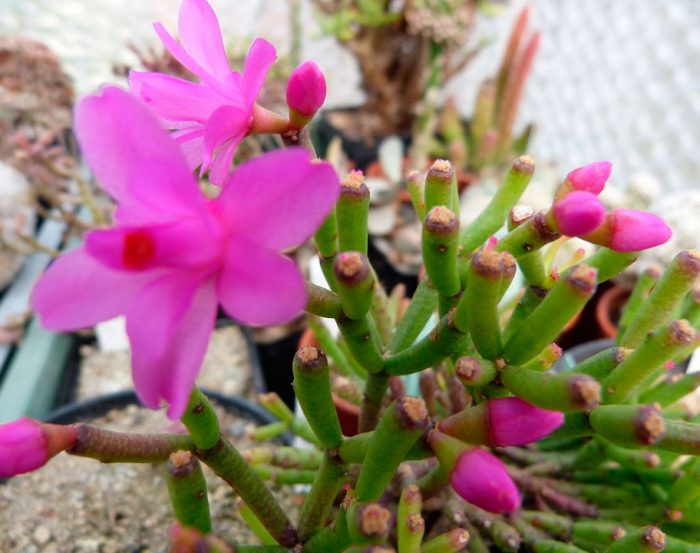 In this plant, shoots are arcuate or straight, they reach a length of about 0.3 m. Their composition includes dark green cylindrical segments in cross section, whose length is 20-50 mm, and in diameter they reach 5 mm. Raspberry flowers. 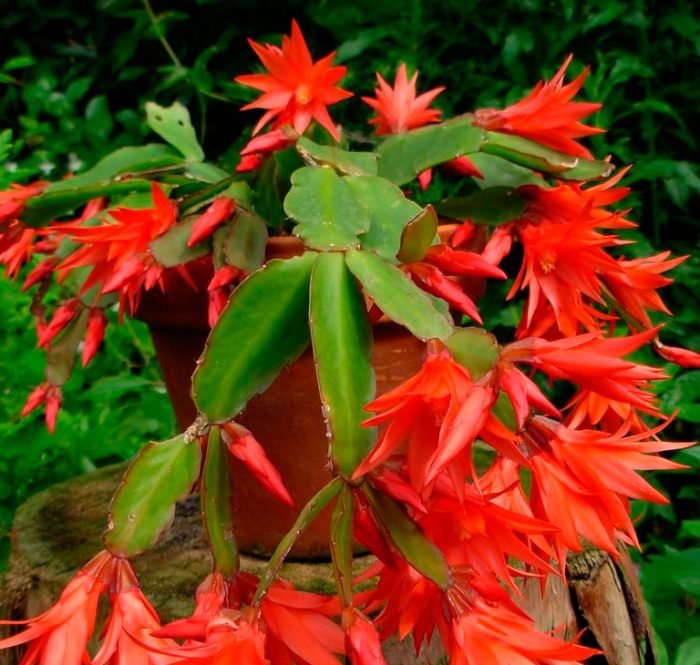 The shoots consist of segments whose length is about 70 mm, having small notches along the edge. The funnel-shaped scarlet-red flowers in diameter reach about 50 mm. 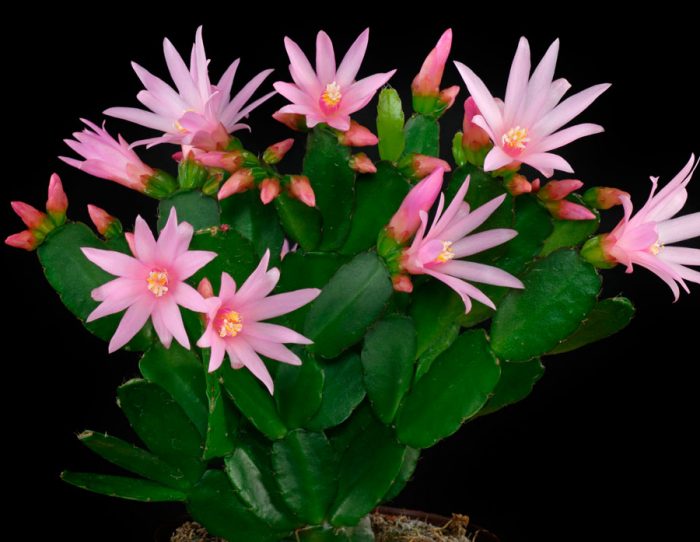 This hybrid was created by crossing Hatior Hartner and Hatior Pink. In flowers, the petals are painted in burgundy red. However, during the restoration, other shades began to appear. 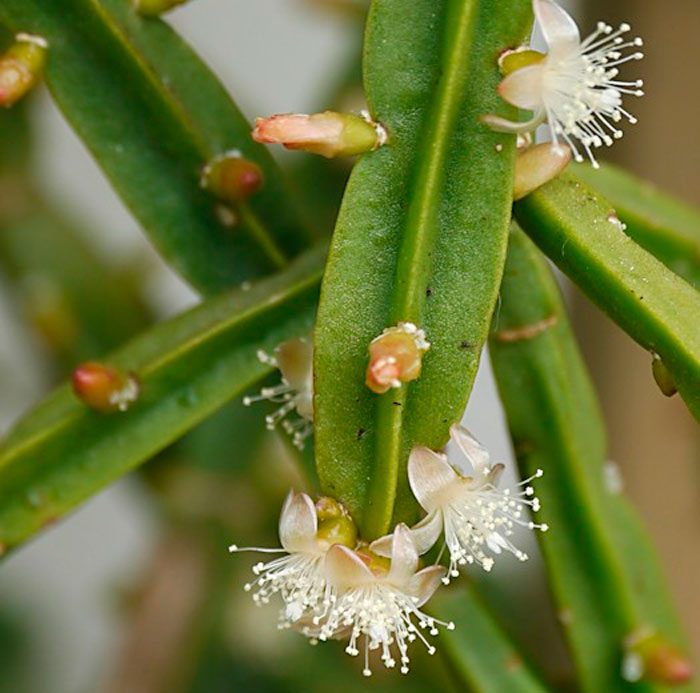 Externally, the plant looks like a small shrub. Its shoots are pentahedral, and the flowers are small and white.

Since the hatiora has an unusual appearance, she received a large number of nicknames, for example: male tears, dancing bones, the dream of a drunkard, etc. Some gardeners are afraid to grow such a spectacular flower in their house, because there are rumors that he is able to expel any man from home. Believe it or not is a personal matter for every person. But at least it has not been scientifically proven.